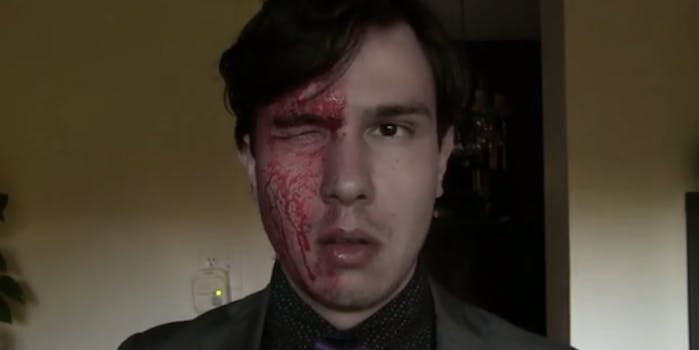 ‘Shoot the Messenger’: The webseries about a guy who’s literally bad news

"The Messenger" (Matt Rubel) delivers terrible news so other people don't have to.

Some people aren’t good at breaking bad news. Others want to avoid the awkwardness of confrontation. Still others are just plain lazy.

That’s why the world needs Toronto comedian Matt Rubel, professional bad-news-breaker and truth-teller, and his webseries “Shoot The Messenger.”

Ep 1 – The Four Musketeers from Matt Rubel on Vimeo.

Ep 2 – The Three Musketeers from Matt Rubel on Vimeo.

Rubel stars as “the messenger,” a guy people hire to deliver bad news. When three friends want to drop their fourth friend because he sucks on camping trips, or a woman needs to hear how her husband really died, he’s there. It’s dark humor, and features references to Training Day, Criss Angel, Breaking Bad, and other awesome pop culture fun-times.

The show doesn’t have a huge budget but, three episodes in, Rubel has proven he’s able to do a lot with very little.

“Shoot the Messenger” is one of a slew of fantastic Toronto-based webseries launched this year. For example, the hilarious adaptation of the infamously bad Harry Potter fanfiction My Immortal, which is currently raising minimal funds on Kickstarter for a second season.

Both series prove you don’t need a big budget to make a funny web show.