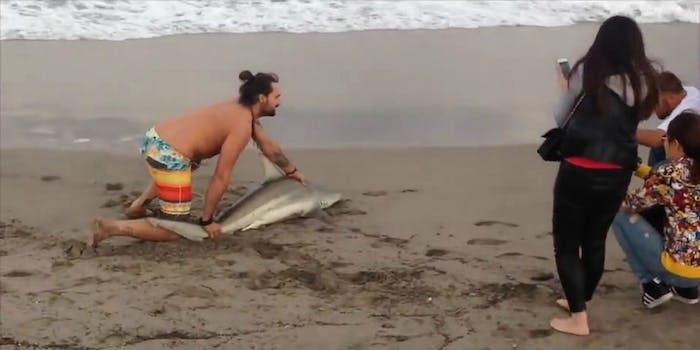 Why is this cruelty becoming a trend?

A dangerous and cruel trend has emerged in the past few weeks that threatens the wellbeing of many animals—all for the temporary pleasure of getting a cool selfie.

First, a rare dolphin died after beachgoers in Argentina pulled it from the ocean and passed it around for photos. Then, earlier this month in China, two peacocks died of fright at a zoo after patrons picked up the birds for selfies and, for some vicious reason, plucked out their feathers.

Then, over the weekend in Palm Beach County, Florida, a man dragged a small shark out of the water and posed for pictures with it.

What’s particularly cruel is the way the man clamped down on the shark‘s tail as it tried to escape back into the water, all while the man smiled and flexed for the cameras.

Basically, this guy was torturing an animal to get a few laughs and perhaps a few social-media likes.

The man placed the shark back in the ocean, but it’s unclear whether it survived. WPTV’s Ashleigh Walters, who posted the above video, wrote that the shark did not resurface for several minutes.

As the Palm Beach Post pointed out, fishing for sharks is legal in Florida, as is killing “spinner sharks as long as they are 54 inches long from nose to tail.” But it’s unlikely that state law permits removing sharks from their habitat to pose for selfies with them before haphazardly tossing them back into the ocean.