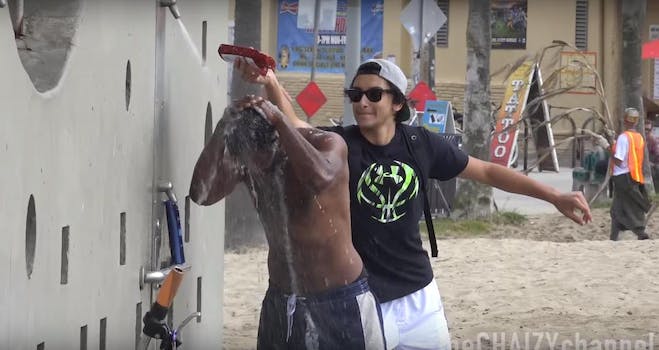 They're giving people a head start on their cleaning routine.

After a day at the beach, people often rinse themselves off in showers near the boardwalk, but one prank group decided to give them a head start on their eventual real shower.

TheCHAIZYchannel, which is best known for spearheading the gallon-smashing prank movement two years ago, came prepared with bottles of shampoo to help beachgoers get rid of that ocean salt feeling in their hair. And for the most part, they didn’t even notice, whether because they were already sudsing up or because they didn’t feel it.

When one potential victim catches him in the act, the prankster just goes and washes his own hair. It’s a pretty decent way to own up, considering.

Although people are already debating whether the prank is fake, it could be harmful for those with sensitive hair. And while shampooing a stranger may pale in comparison to gallon smashing or pieing a stranger in the face, using the wrong product for someone’s hair could potentially damage it. And that’s just mean—not to mention creepy.