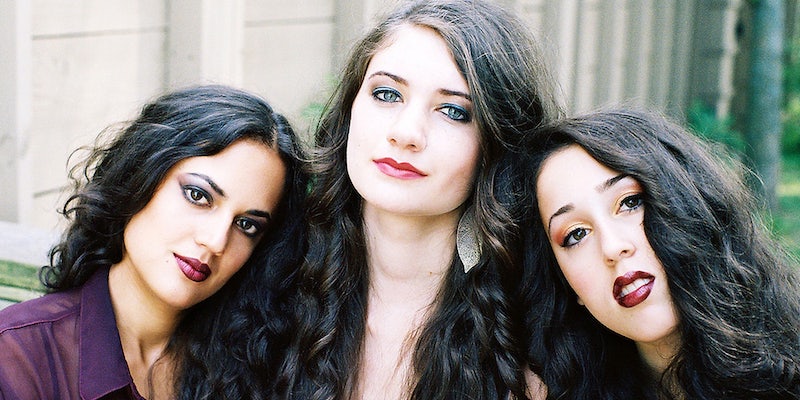 Photo via Laura D'Alessandro/Flickr (CC BY 2.0)

It's not just about fat or skinny. As a woman, there's no way to win.

When it comes to their appearance, women just can’t win. No matter what they look like, they’re never enough—not thin enough, not young enough, not white enough, or not clothed enough. The Breakfast Club‘s brilliant and shaggy-haired Allison once described our culture’s view of female sexuality as such: “If you haven’t, you’re a prude. If you have, you’re a slut. It’s a trap.”

The same could be said about the expectations for women’s bodies—the whole thing is a rigged game, and the only people winning are men.

In 2015, it is no longer just about whether a woman is skinny or fat. Beauty standards are at such a ridiculous place right now that there are countless ways women can fail, and a number of incidents over the past year illustrate that men—especially ones in charge of hiring decisions—need to start drastically adjusting their perceptions of what a “real” woman looks like.

Four incidents that have gone viral perfectly illustrate this problem.

Take, for example, Sarah Hoffman, a provincial health minister in Alberta, Canada who was recently attacked by a high-ranking politician who said, in essence, that she was too fat to do her job. Stephen Lien, the southern Alberta vice president of the Progressive Conservative party, wrote a Facebook post saying, “Our morbidly obese Health Minister Sarah Hoffman is going to ban the sale of menthol tobacco produces in Alberta as of September. I would assume then that if health is the chief concern, that all sodas, candy, processed sugar products… and fast foods… should then follow?”

The implication, of course, is that as a fat woman, Hoffman is not qualified to write legislation about health, as if a person’s size somehow limits their intelligence or their understanding of the law.

Hoffman is not the only one thought to be incapable of doing a job just because of how she looks. Several weeks ago, the story of 29-year-old Victoria Smith went viral, after she was rejected from a job because her thighs were too big. Smith, a self-described amateur body builder, applied for a job at the Tilted Kilt, a chain restaurant that requires its female employees to wear mini skirts, barely-there crop tops and plaid bras.

Smith–who is petite and thin–sailed through the first two interviews, then at the third was asked by general manager Scott Gasiorowski to put on one of the franchise’s signature “mini-kilts.” When Gasiorowski saw Smith in the skirt, he immediately focused on her legs, saying that her thighs were “pushing the skirt out” so that the kilt didn’t hang properly. He told her that she wouldn’t be getting the job—because the fit of the kilt mattered more than her qualifications. He then asked her to come back in 30 days once she’d lost some weight.

Fatphobia isn’t the only thing holding women back: racist, white-centric ideas about how women should look also contribute to body-shaming. Corporate and school dress codes often restrict how black women are allowed to wear their hair. Last year, the United States Army released a new appearance and grooming policy that limited—and in some cases outright banned—servicewomen from wearing certain hairstyles popular among black women.

And as Ayana Byrd and Lori L. Tharps noted, while the regulations don’t specifically mention race–they’re divided by gender–many of the sections clearly apply specifically to black women, since they mention styles like cornrows, twists and dreadlocks. Not only that, but many of the acceptable hairstyles are not possible due to the thickness and texture of black women’s hair. According to Byrd and Tharps, “the current policy is the equivalent of a black majority military telling its thousands of white soldiers that they are required to have dreadlocks or afros.”

Dress codes impact women in other negative ways, especially by unnecessarily sexualizing women who wear outfits that reveal their midriffs, upper thighs, or even shoulders.

Cameron Boland, a 17-year-old student, learned this last week shortly after being elected National Honor Society Historian in her Florida school district. Boland held her post for all of 41 minutes before being stripped of the title for wearing a sleeveless dress while giving her victory speech. She was told that the spaghetti straps on her dress violated the dress code of Ida Baker High School, the school where the ceremony was held (but not, it’s worth noting, the school that Boland attends).

Boland told WINK News, “We put our jackets on and asked if we could apologize and redo our speech and we were told no.” How is that acceptable treatment for a teenage girl whose only crime was baring her shoulders?

Many people would argue that these viral body-shaming incidents didn’t affect these women beyond hurting their feelings (which, honestly, should be reason enough on its own not to do it), but the truth is that our intense focus on women’s appearance influences nearly everything about women’s lives, including their ability to find employment.

A 2013 study done by researchers at the University of Medina titled “Searching for a job is a beauty contest” saw researchers sending out over a thousand resumes to various companies. In each case, the work experience and qualifications were the same; only the names, genders and pictures were changed. Unsurprisingly, the study showed that women who were considered to be attractive were called in for interviews 54 percent of the time, where as women considered to be unattractive had a 7 percent callback

“Thus,” the paper bleakly concluded, “searching for a job seems to be just like a beauty contest: It is better for unattractive women to invest on aesthetic surgery than in education.”

Our intense focus on women’s appearance influences nearly everything about women’s lives, including their ability to find employment.

Take a second to let that sink in: A study done by an academic institution opines that it is more economically advantageous for women to pay to have their appearance altered than it is for them to get an education. There are few harsher or more accurate statement about how our rigid beauty standards impact women.

And not only does our culture rewards women who come closest to fitting the the feminine ideal—white, cisgender, heterosexual, thin, able-bodied, and conventionally attractive—it creates an environment that is dangerous and even sometimes deadly for those who don’t.

The average life expectancy for a black transgender woman is 35, while countless women who have been murdered because their bodies were not what someone thought a woman’s body should be. Our expectations about what women’s appearance don’t just hurt people’s feelings—they put lives in danger.

There is no quick fix to this problem. Not only is the belief that women only have value so long as they’re attractive deeply entrenched in our society, but untangling the many, many intersecting oppressions that have formed our current view of the feminine ideal will take generations of work.

But while we unpack all of our culture’s gender garbage, there is one immediate and easy thing we can do in the meantime: Stop talking about how women look—because how she looks is her own business and unsolicited opinions aren’t helping anyone. What seems to you like a harmless observation may, in fact, be very damaging. Instead of commenting on a woman’s appearance, try telling her that she’s funny, or competent, or very knowledgeable. In fact, every time you find yourself about to give out a looks-based compliment, just tell her she’s smart. Tell her she’s incredibly, wonderfully smart.

The game may be rigged, but sometimes we can find ways to re-write the rules.

Photo via Laura D’Alessandro/Flickr (CC BY 2.0)