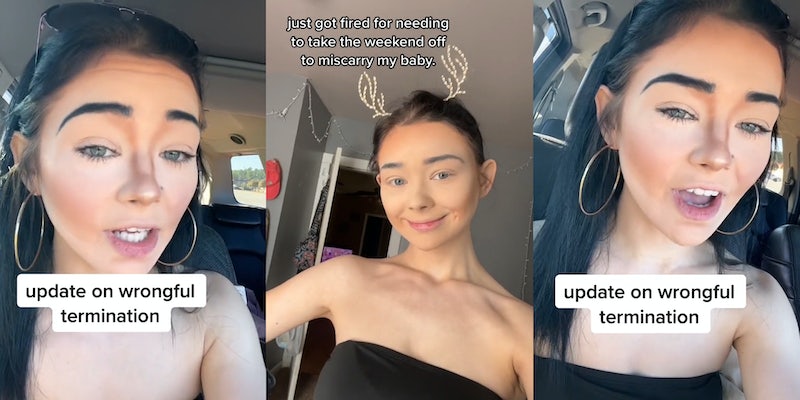 ‘Guess I’m finna sue’: Server says they were wrongfully fired after taking time off due to miscarriage

'I miscarried in my old job's bathroom and ended up having to go to the hospital. Came back to no job.'

A server says they were fired after missing work while having a miscarriage in a now-viral TikTok, prompting viewers to encourage them to sue their employer for wrongful termination.

In a video posted by TikToker Samantha Lane (@sammielane9) on Nov. 18, the text overlay reads, “just got fired for needing to take the weekend off to miscarry my baby.”

The video has reached over 780,000 views as of Nov. 22, with commenters encouraging Lane to sue their former employer for “wrongful termination.” According to an article by A Better Balance, Pregnancy and miscarriage are protected conditions under several workers’ rights laws, such as the Pregnancy Discrimination Act and the Family and Medical Leave Act.

Other viewers shared their own experiences of losing their job due to seeking care during a miscarriage.

“HR wouldn’t let me take time off for bereavement because ‘there was no proof of death,'” one user shared.

“I miscarried in my old job’s bathroom and ended up having to go to the hospital. Came back to no job,” another said.

In a follow-up video, Lane explains that they were able to get their job back after confronting their “boss” because their “absence was protected under the FMLA.”

“I was like, ‘Is there some sort of paperwork that gets filed whenever someone is fired? And if so, could I get a copy of it?’ He was like, ‘Sure. Where were you this past weekend?’ I kind of got a little attitude and said, ‘Miscarrying my child,'” Lane says in the clip.

They continue that their boss said it was a “miscommunication between management,” even though they discussed the situation with their female managers previously.

“I shouldn’t have said nothing. I should have just gotten my paperwork from my doctor and sued,” they say.

The Daily Dot reached out to Lane via TikTok comment.