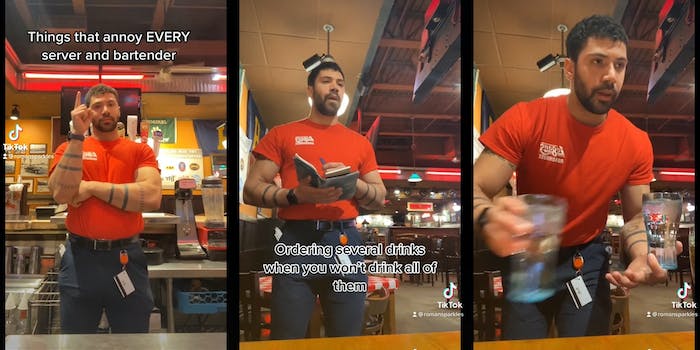 'Half these people in comments never worked in a restaurant and it shows.'

A server shared “things that annoy EVERY server and bartender” in a viral TikTok video.

In the video, the TikToker, Roman (@romansparkles), pretends to take customers’ orders.

He asks the “customers” what they’d like to drink, and one says they’d like both a soda and a “cup of water.”

“OK, so if I bring you the coke and the water, you’re drinking the entire water. Because if it’s full by the time I get back and you’re gone, I’m beating your fucking ass,” Roman says in the video.

He then drops the beverages off at the table. When he comes back, the four glasses of water are still full, but the sodas are gone. “Those motherfuckers!” he says disappointedly.

“Things that annoy EVERY server and bartender,” Roman claimed via text overlay on the clip.

Roman implied this happens “every single time” a customer orders both water and soda in the caption of the TikTok.

The video was viewed over 194,000 times, and a debate was sparked in the comments section. While some could relate because they worked in a restaurant in the past, others criticized the TikToker.

“Is there anything servers and bartenders don’t complain about these days Jesus make people not wanna go out,” one person commented.

“Bro if this grinds your gears as a server you need to start applying for a different job lol” another person wrote, to which the creator responded: “So there’s not a single thing about your job that’s even the slightest bit annoying? If so do the same and I’ll join you.”

“Half these people in comments never worked in a restaurant and it shows,” another said.

The Daily Dot reached out to Roman via TikTok comment.