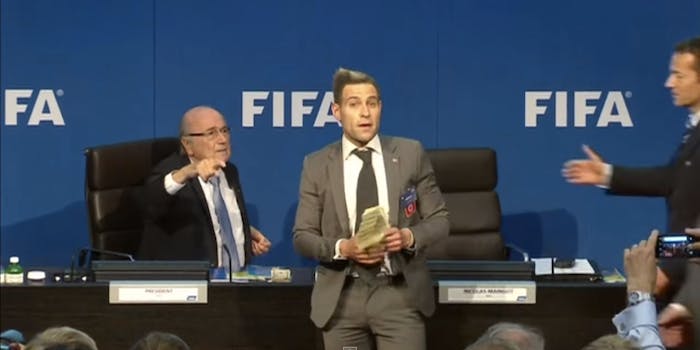 The stunt delayed the press conference for 10 minutes.

Blatter’s resignation came as several FIFA officials face corruption charges and extradition to the U.S. While Blatter has long been suspected of aiding criminal schemes within FIFA’s upper ranks, he has never been charged with a crime. FIFA will hold a special leadership session on Feb. 26, 2016, to elect his replacement.

Blatter was answering questions about why he decided to resign and other topics when Simon Brodkin, in his soccer-player persona “Lee Nelson,” took the stage.

“Sepp, this is for North Korea in 2026,” Brodkin said, presenting Blatter with wads of money.

Brodkin’s stunt referenced FIFA’s controversial decision to award Qatar the 2022 World Cup. The decision has made headlines because of the number of people who have died during Qatar’s construction of World Cup stadiums.

Before police escorted Brodkin offstage, he threw the money at Blatter and assured the FIFA head that the money was “all there.”

The press conference was delayed for 10 minutes to clean up the mess. Once it resumed, Blatter revealed that he would like to become a journalist.

Excited to be at FIFA meeting Sepp Blatter to secure the #NorthKorea2026 World Cup. pic.twitter.com/7UV6spP8wc

Brodkin certainly made it rain, according to the Internet.

This is nothing new for Brodkin. As Nelson, he took the stage at Glastonbury earlier this year during Kanye West’s set. As another of his characters, Jason Bent, he tried to join England’s World Cup team as they traveled for training. In both cases, he was unsuccessful.