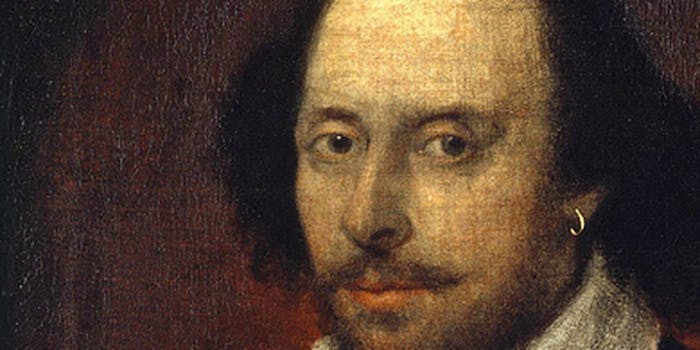 Man gets payback by texting scammer the complete works of Shakespeare

"And if you wrong us, shall we not revenge?"

Revenge animates some of Shakespeare’s finest plays, so it’s only fitting that the Bard would help a Bristol man get back at a scammer who took him for a few quid.

After striking a deal on Gumtree—the U.K. equivalent of Craigslist—to buy a PlayStation 3 for £80 ($133), graphic designer Edd Joseph made a direct bank transfer to the seller. But, alas, his PlayStation 3 was never delivered, nor would the seller provide a refund. Since the transaction violated Gumtree’s terms and conditions, and the police weren’t in a rush to act, Joseph’s mind, like Iago’s, took a diabolic turn.

Pretending to know where the seller lived “was all a bit of a cliché, and it wasn’t going to worry him really,” Joseph told the Bristol Post. “Then it just occurred to me you can copy and paste things from the Internet and into a text message. It got me thinking, ‘what can I sent to him,’ which turned to ‘what is a really long book,’ which ended with me sending him Macbeth.”

And lengthy it is: with each message capped at 160 characters, the fittingly accursed Scottish play was delivered in 600 separate texts, though Joseph was able to send the entire thing with a single click. With his £37 ($61) per month unlimited calls and texts plan from O2—which couldn’t have planned a better marketing stunt—it’s not costing him anything extra, either.

His nemesis, meanwhile, seems to be suffering greatly under the deluge of Elizabethan drama, having by now received Othello, Cymbeline, Hamlet, All’s Well That Ends Well, and eighteen other works in the course of some 17,424 texts, often at night. “I got the first reply after an hour,” Joseph said, “and then a few more abusive messages after that. His phone must have been going off pretty constantly for hours. But recently he has taken to calling me and giving me abuse on the phone. I tried to ask him if he was enjoying the plays, but he was very confused.”

Not everyone is cut out for a liberal arts education, perhaps.