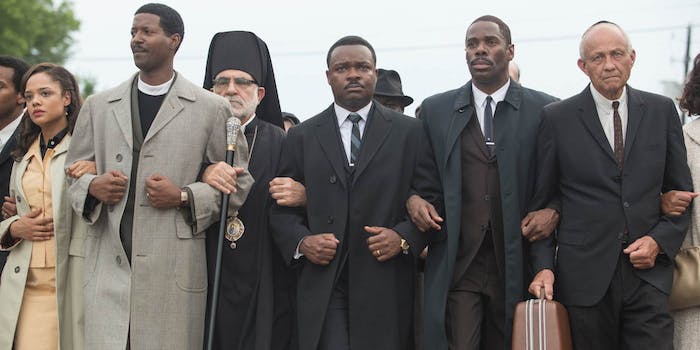 Black people continue to ride at the back of the bus in Hollywood.

Every Oscar nominations morning for the last nine years—since I began getting obsessed with the Academy Awards full time—I wake up early, usually around 6am, and pour myself a cup of coffee. I read the Oscar tea leaves, review the probable nominees, make some breakfast, and wait to see if Santa brings a happy surprise.

As nearly anyone following the Oscars knows, the answer is usually “No,” like the year that The Blind Side forever became a Best Picture nominee or that time the Academy decided The Reader was better than The Dark Knight. This year was filled with some welcome surprises (Marion Cotillard! Laura Dern!), but between the snubs for Life Itself and Nightcrawler, it’s enough to break your heart.

But as nearly everyone with a Twitter account knows, snubbing Roger Ebert somehow wasn’t the worst thing the Academy had up its sleeve today. Aside from token entries in the Best Picture and Song categories, Selma was all but shut out of the lineup—with its director (Ava DuVernay) and lead actor (David Oyelowo) snubbed on Thursday morning. In their place, the Oscars went with business as usual: The director lineup was completely male, with Foxcatcher’s Bennett Miller likely taking DuVernay’s spot. What’s odd about this is that Foxcatcher wasn’t even nominated for Best Picture in a vastly expanded field of eight nominees, meaning that he was somehow better at directing a movie the Academy didn’t like that much.

Does that mean Bradley Cooper is one of the greatest actors to ever live or does the Academy have a race problem? You tell me which is more likely.

If nominated, DuVernay would have made history as the first black woman to ever contend for a Best Director Oscar (instead, we got Morten Tyldum). Her snub might have been expected by those following the race closely—this was two days after the Directors Guild left her off its list—but the David Oyelowo snub is particularly troubling. Aside for the SAG awards, Oyelowo has been nominated by nearly every other voting body on the face of the earth, including the Golden Globes and Broadcast Film Critics Association. Instead, Oscar voters went with Bradley Cooper, who had been nominated both of the previous two years, tying him for a record with Russell Crowe. Is Bradley Cooper one of the greatest actors to ever live, or does the Academy have a race problem? You tell me which is more likely.

This year, every single acting nominee was white, the first time that’s happened in the past 17 years. The last all-white acting pool was 1998, when Titanic won Best Picture and Helen Hunt was still a thing. While each year since then has stayed pretty white, the Academy usually made a show of inclusion by singling out a person of color for recognition. After the Titanic whiteout, Fernanda Montenegro received a Best Actress nomination for her work in Central Station, and the following year Denzel Washington played the role of the Oscars’ token black friend. After 12 Years a Slave won Best Picture last year, the Oscars certainly felt like they were moving toward inclusion, but they’re as white as they ever were. After all, a black lead hasn’t won in nearly a decade, since Forest Whitaker’s 2006 Idi Amin biopic, The Last King of Scotland.

The Academy voters are 94 percent white and 77 percent male, and they tend to vote for people like them.

And there’s a reason for that. The Academy voters are 94 percent white and 77 percent male, and they tend to vote for people like them. This has led to a culture where, between 1927 and 2012, 91 percent of all Best Actor nominees were male and a shocking 99 percent of Best Actress winners were white—everyone except Halle Berry. In 2012, Viola Davis was considered the wide front-runner for her role in The Help, as she’d been cleaning up all awards season for her acclaimed turn in the civil rights dramedy; instead, Meryl Streep came out of nowhere to win her third Oscar for the Margaret Thatcher movie (The Iron Lady) everyone hated, a performance many believe to be among her worst.

The Academy has been pushing to be more diverse in recent years, even naming its first ever black female president in Cheryl Boone Isaacs. When 12 Years a Slave got nominated last year, Issacs said of its inclusion: “I would say that means a major door will have been kicked down. I believe very strongly that the entertainment and motion picture business is going to be more open and aware of different voices.” But that hardly appears the case. As Vox’s Todd VanDerWerff put it, if you want your movie to get nominated at the Oscars, “it’s best to be a mediocre movie about a white guy.” While this year’s race saw exceptions to that rule—Boyhood, Whiplash, and Birdman were standouts—how else would have A Theory of Everything gotten in? The Imitation Game is one of the best movies of the year?

According to VanDerWerff, the most common argument is that no “black movies” were deserving. If they were getting made and good, they would be recognized. However, that’s not true. “But what about the James Brown biopic Get on Up, far more engaging and arresting than either Imitation or Theory?” VanDerWerff argues. “Or Chris Rock‘s Top Five, a deeply flawed but still interesting film about the nature of being black and famous in America? Or the surprisingly, unjustly ignored Beyond the Lights, the kind of show-business movie the Oscars have salivated to award in the past but just couldn’t be bothered by this year?” This was also true of DuVernay’s own Middle of Nowhere, an acclaimed indie drama that would have gotten a lot more attention if its characters happened to be white. Anyone remember the Oscar love for Dee Rees’s Pariah? Me neither.

As VanDerWerff, none of these movies were all that financially successful—but a modest gross didn’t stop any of the movies directed by white dudes from getting nominated. While American Sniper is destined to be a smash (Clint Eastwood + starry-eyed jingoism = $$$), The Theory of Everything, Boyhood, and Birdman have all pulled in nearly the same amount of money at the box office as Chris Rock’s breakout vehicle; his film has also made four times Whiplash‘s gross. Top Five even got better reviews on Metacritic than The Theory of Everything, American Sniper, or The Imitation Game did and is similar in structure to Boyhood director Richard Linklater’s own Before movies.

Of course, it’s almost silly to pretend that Top Five would ever get nominated for Best Picture: It stars a black guy who doesn’t need Brad Pitt to save him, like in 12 Years a Slave.

Of course, it’s almost silly to pretend that Top Five would ever get nominated for Best Picture: It stars a black guy who doesn’t need Brad Pitt to save him, like in 12 Years a Slave. Similarly, Selma has been widely critiqued for portraying President Lyndon B. Johnson as dragging his feet on civil rights; if it were called LBJ and made Martin Luther King an accessory to his own history (à la The Help), Selma would likely fare a lot better. Instead, Selma was a civil rights movie about black people fighting for their own rights, one with grave implications for our racial politics today. After the Ferguson verdict, studies showed that white jurors have a difficult time empathizing with people of other races. Is the Academy any different?

The Selma snub matters not only because it shows how far the Academy has to go in its push toward inclusion (see also: all the women nominated for screenwriting, cinematography, and tech this year), but also because it shows how the deck continues to be stacked against black folks in Hollywood. You can say that Selma didn’t get nominated because the screeners didn’t get there on time, the controversy killed it, or maybe the Academy thought it filled the quota last year and is now absolved of nominating black people for things. But the next time you hear that an Oscar-worthy black artist is leaving the movies for TV—like Steve McQueen, Viola Davis, or Halle Berry—don’t say it has to do with the speed of the mail system. It’s about the pace of progress.