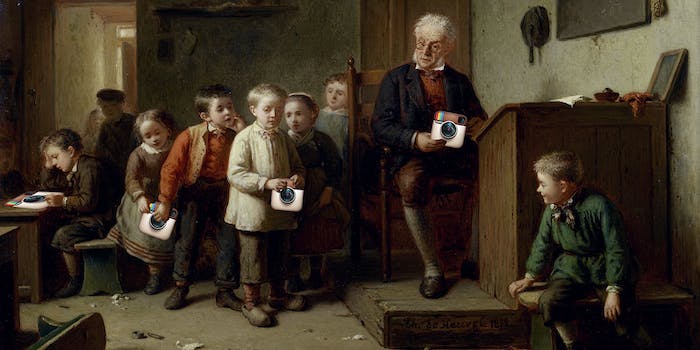 Everything I learned in Selfie School

If people are taking photos of themselves with art, British gallery the Tate wants to ensure they're at least good ones.

As an April Fools’ prank, Australian events organizers Red Balloon began offering tickets to a “Selfie Workshop” at $110 a pop. Now, in proof that life mimics art and reality is beyond satire, British art gallery the Tate countered with a special, one-off #SelfieSchool last Friday.

Part of its “Late at Tate” evening event series, the venerable institution was hoping to “examine the influence and connections across politics, style extremes, and transformations in art.”

Selfies have certainly crept into every corner of pop culture. Just this week, a White House adviser suggested the Obama administration was considering a ban on selfies with the president after a sly Samsung stunt backfired. There’s a company trying to make selfies a part of event ticketing, and at least one guy trying to make “gravies,” or selfies at cemetaries, happen. No wonder there’s a growing anti-selfie movement.

Desperate to catch up with the times and up my social media game, I went along to learn from the pros. 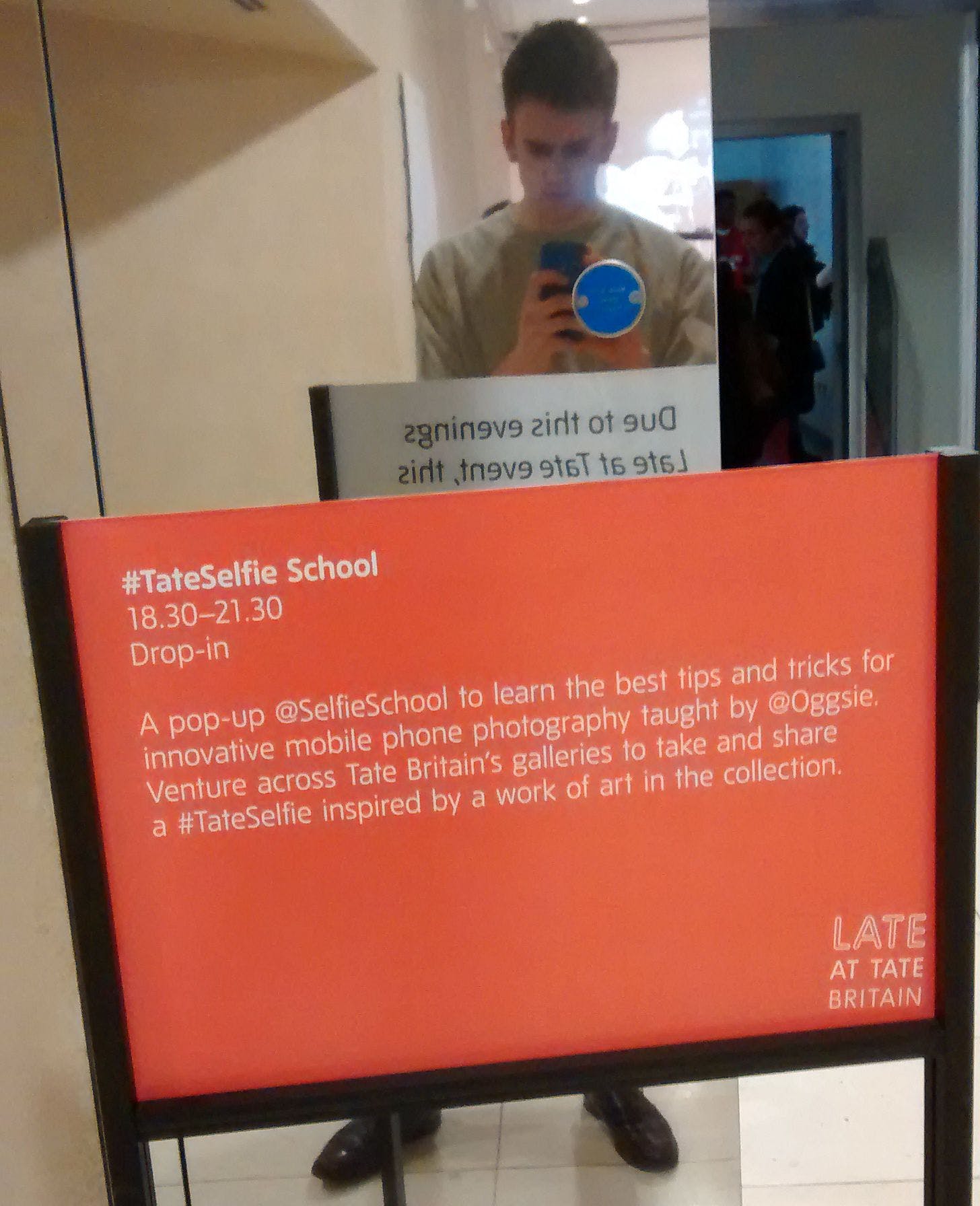 On my way in, I snapped a selfie next to the event description. That was my first mistake.

As an assistant helpfully explained, I should try using a specialized app, preferably Instagram, so I could #hashtag my photos and connect to other attendees later. There’s no shortage of similar apps out there, like Snapseed or Bright Camera, each offering a unique take on selfies.

Lesson learned, I booted up Instagram for the second time ever and uploaded my first #TateSelfie of the evening.

I had used the projector to add a little flair, but so far, so normal. I decided to try something a little more avant-garde.

The event was run by @Oggsie, a.k.a. Oliver Lang, a self-styled “Instagram Consultant” and all-round social media big dog. His motivation in establishing #SelfieSchool is to improve “visual literacy.” If people are taking photos of themselves with art, they might as well take good ones, he told me.

After running through the basics (lighting, framing, context), he recommended I go to the 1540 Gallery to check out some classic renaissance selfies. After all, “selfie” might be a new word, but it’s an old concept. The essence of a selfie is directorial control, I’m told: So long as you’re producing your image, it doesn’t matter if it’s a photo, an oil painting, or modeled in clay. Ancient cave paintings are just as much a selfie as is Ellen Degeneres’s record-breaking Oscar photo—apparently. 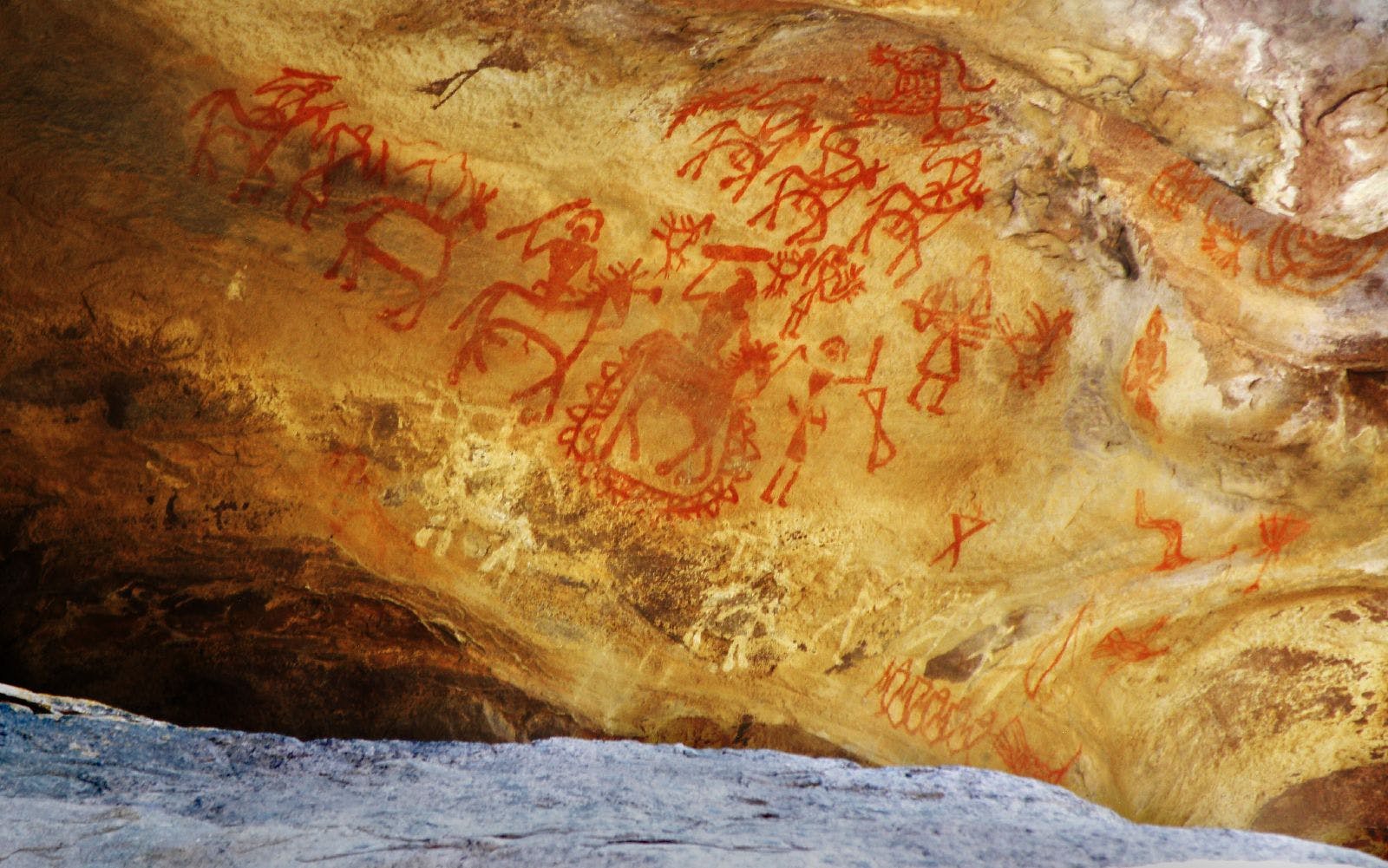 Head full of selfie tips and keen to spend my evening looking at my phone instead of the art on show, I headed up to the 1540 Gallery. That’s where I ran into the flamboyant Harold Offeh and his Hairography workshop, another “Late at Tate” event designed to “explore the visual language, social and cultural dynamics of hair advertising.”

Seizing this opportunity for some cross-disciplinary selfie action, I donned a luscious blond wig and indulged in some fine-art-inspired photographic self-portraits.

I also managed to get a selfie with Offeh himself. Unfortunately his faux fur loincloth didn’t fit in the picture, but I got the next best thing—a bust of Charles I, “the Martyr,” pre-revolutionary King of England.

Venturing deeper into the interactive Hairography exhibition, there were trampolines and industrial fans to enable attendees to explore their hairs’ physical and cultural qualities alongside pre-Raphaelite portraiture. Standing next to one to these fans, I soon found myself channeling my inner Julian Assange.

I then found this pretender. Sorry love, but I did the windswept look better. Also, has anybody else noticed how dull art looks when it’s #nofilter?


Check out this 3-D selfie.

At this point, even my 11 new followers and 14 likes couldn’t block out the feeling that this was all a bit empty. I don’t wish to tell people how they should appreciate art, but I found myself paying far more attention to how the photo looked than the artwork itself.

By placing a lens between myself and the work, I lost the immediacy that normally gives art its power. Francis Bacon’s dominating work held no terror for me while I was busy trying to catch my reflection in the glass.

Of course, visual literacy is important. Camera phones have democratized photography like never before, and @Oggsie’s mission is a noble one.

But an art gallery, nominally a place of reflection, just felt like the wrong venue for it. As seen with #aftersexselfies, there’s increasingly a knee-jerk sharing reflex that, in the eyes of many, lessens human experience to a game of “likes.”

But then I saw it, sculpted in iron, with a captivating poised angularity. It brought back another of @Oggsie’s lessons: that a selfie “doesn’t even need to have you in it,” as long as it represents you. The #SelflessSelfie is a thing. As I snapped a photo of Reg Butler’s Woman and applied the #Valencia filter, I knew: I’d done it.