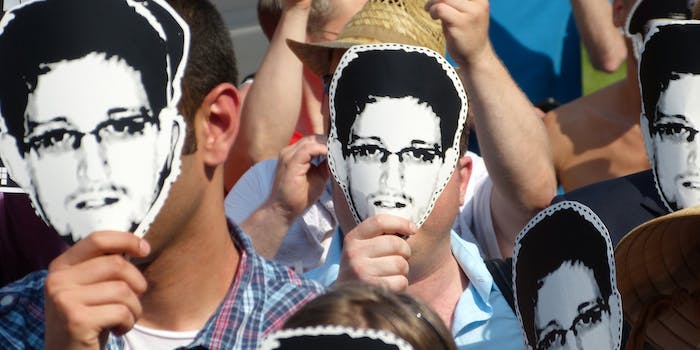 If there is a second Snowden—or even a wave of activists who follow in Snowden’s footsteps—then they need to learn from his mistakes.

In an introductory post on his new independent news site, the Intercept, Glenn Greenwald mentioned in passing that he has a “new well-placed source.” When interviewed by CNN prior to the site’s launch, Greenwald hinted that he is in contact with other government officials.

“I definitely think it’s fair to say that there are people who have been inspired by Edward Snowden’s courage and by the great good and virtue that it has achieved.”

A former National Security Agency contractor, Snowden has leaked an enormous volume of government documents that reveal evidence of United States’s mass surveillance. He has been hailed as a hero by some, and denounced as a traitor by others.

One thing is certain: His actions have triggered a wave of investigations into government intelligence agencies, both in the United States and elsewhere, that is more critical and more aggressive than ever before. Journalists are scrambling to break the next big story about abuses of power by the intelligence community. This may even lead to a new wave of whistleblowers: government employees following their guts and going rogue to tell the public what they know.

If there is a second Snowden—or even a wave of activists who want to follow in Snowden’s footsteps—then they need to learn from Snowden’s mistakes.

After all, by many measures, Snowden’s antics have been a complete flop.

Edward Snowden himself was part of the problem. He fled the United States before any charges were brought against him, resulting in claims that the U.S. government would most certainly try to assassinate him if they thought it would stop the leaks from continuing. This, of course, was joyously picked up by conspiracy-oriented websites such as infowars.com, which held it up as a sign of the deep evil of our shadowy government, when they weren’t busy speculating that Snowden’s behavior may actually be a false flag operation designed to distract from the onset of World War III.

Then there was the path that he travelled. One article in the New Yorker remarked on the “sheer cosmic strangeness of the state of affairs in which an American whistleblower feels that he should flee to Chinese territory to avoid the power of the U.S. government.” If “cosmic strangeness” is the word for that, then surely it must be a “cosmic joke” that his final landing place was Russia, where the state department recently issued this notification to all tourists who might be visiting for the Olympics:

“Travelers should be aware that Russian Federal law permits the monitoring, retention and analysis of all data that traverses Russian communication networks, including Internet browsing, email messages, telephone calls, and fax transmissions.”

Then there were the accusations of narcissism. It’s worth taking a moment to understand where these accusations came from, and what they mean, because so many in the media have interpreted them wrongly. Nobody could seriously think that Snowden did the things that he did simply to “get attention.” There is no doubt that Snowden truly felt that he was doing the right thing by acting on his conscience.

However, thinking that your own personal judgment matters more than laws that have been passed and ratified, as well as contracts that you have signed with your employer, is frustratingly self-centered. It takes only a moment’s reflection to realize that if everybody ignored legal and contractual rules and just “went with their own intuition” about what information should or should not be made public, the government could not function at all.

When people accused Snowden of being a narcissist, they were not calling him a mere attention-seeker. They were saying that he acted without self-reflection and without consideration for others, like a child who thinks that he knows best and therefore can ignore everything else.

In fact, his entire escapade has all of the hallmarks of not being carefully considered, right down to the massive and unfiltered dump of documents into the laps of journalists. The media has had to filter through the documents over a period of months to determine what actually warranted being revealed. The fact that the media has shown so much discretion implies that Snowden himself had little by comparison. It was as though he (metaphorically) simply pushed a box of papers out the window and ran.

In short, Snowden was simply not behaving the way Americans expect a thoughtful, proud, upstanding hero to behave, making him an easy target for character assassination.

The media is part of the problem

Thanks to Snowden’s leaks, the media has constantly inundated us with overly hyped stories that people ultimately don’t care that much about.

The first one was a big one, to be sure: The NSA is broadly collecting and saving phone call and email data from American citizens, without any targeting or reason. If nothing else, Snowden’s performance-art antics have succeeded in getting the public to care about this issue. It has even risen high enough in the public consciousness that President Obama was forced to address the issue in his State of the Union speech, promising to review and restrict the manner in which the NSA collected data on American citizens.

But since that initial revelation, activists and the media have been vomiting a near-continual flow of “new” stories that have become boring to the American public. There have been stories monthly, or even weekly, since June 2013. But for most people, these “revelations” fail to resonate beyond confirmation of things that they already knew or assumed.

To political junkies or privacy enthusiasts, every single story about another company selling access to its records or another phone carrier giving up its information is important. However, to the vast majority of Americans it becomes background noise: “Another story about our government spying on us? I already knew that.”

The NSA is spying on foreign leaders? “Figures.”

The NSA is hacking China? “Good!”

The government is engaged in cyberattacks on Pakistan? “Not surprised.”

It has all become very blasé. If the media thinks that reporting “more of the same, but with more intensity” will make people interested, they are wrong.

People are tired of hyped-up news stories. Everybody is so eager to overplay their hand. The media announces that it has documents proving that the NSA is recording people’s phone calls; then it turns out that it’s not recording phone calls, it’s only recording metadata. The government claims that Snowden’s leaks have cost American lives; then it turns out that they can’t even prove that their intelligence gathering has saved lives.

The American people don’t like being jerked around. The public is turned off by bickering about technicalities. For all of the sound and fury that has come from Snowden’s antics, the public has settled on one and only one thing that they really care about: Please stop recording our stuff.

It could be considered a success of sorts; but if any more whistleblowers emerge from the shadows, they are going to have to do better.

What America needs is not another Snowden

America doesn’t need another Snowden. What we need is someone who actually acts the way Americans want an idealistically driven hero to act. If you want to be the next freedom crusader, the next government whistleblower, and you want to be effective, then Edward Snowden has shown you exactly what not to do.

Don’t be a conspiracy nut. When you flee the country before you have been charged with anything, and talk in interviews about your fears that the government is going to assassinate you, all it shows is that you read too much Infowars.com. If you want to be taken seriously, don’t align yourself with the types of people who believe that “chemtrails” are the government manipulating the weather and fluoride is part of a government plot to make people stupid.

Don’t make your own fear the story. You’re not the story. Once you start plane-hopping and releasing grandiose statements about the amount of danger you are in, you seem less like someone who cares about freedom and more like someone who didn’t fully think through his actions. If you are scared, that’s understandable. Just don’t make that the news story.

Don’t just assume you know better than everyone else. Have some respect for the fact that your own opinion isn’t all that matters. There are many ways to work within the system, to get support from others. And when it comes time, if you feel like you have to break the law because the law is unjust, your case will be so much stronger because you can show that you tried to produce change without breaking the law first.

Show us something we don’t already know. Shadowy suspicions about “possible abuses of power” and information that “might be abused” only really work on political activists and privacy enthusiasts. For most people, there is only a story when there is actual abuse of power. A new whistleblower is going to have to come forward with something better than “there is yet one more way that the government is gathering one more kind of information about you” or “this is another thing that the government could use to do something bad, even though it hasn’t yet.” A new whistleblower has to have something substantive and new.

America doesn’t need a second Snowden. We’ve seen the first Snowden, and he isn’t the hero we’ve been looking for.