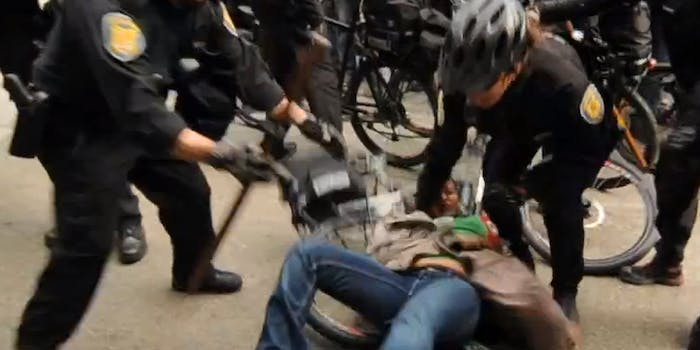 Contrary to the Seattle Police Department's account, the video showed defendant Maria Jannett Morales being grabbed by the hair by an officer without provocation.

Prosecutors have dismissed charges against a May Day protester after reviewing YouTube footage that proved her innocence, according to a Seattle Weekly report.

Maria Jannett Morales, 30, was charged with fourth degree assault in King County, Wa., a felony, after Seattle police arrested her for an incident that occurred just before 6pm PT on May 1.

According to police reports submitted to case prosecutors, Morales punched female officer Sonya Fry in the chest without provocation after calling her a “bitch.” Reports also declared that Morales kicked another police officer in the leg.

The Seattle Police Department’s account of the incident was called into question after prosecutors came upon a May 2 YouTube video that finds Fry grabbing Morales by the hair and pulling her to the ground without any physical provocation.

Prosecutors dropped the charges against Morales on Aug. 17, after reviewing the YouTube footage. Prosecutor spokesman Dan Donahue said that he “felt that we could no longer prove a case beyond a reasonable doubt, so the charge was dismissed.”

Morales is the second May Day protester to have charges dropped as a result of evidence showing up on YouTube. On May 15, protester Joshua Alex Garland was dismissed of assault charges after a YouTube clip found that police had incited altercation.