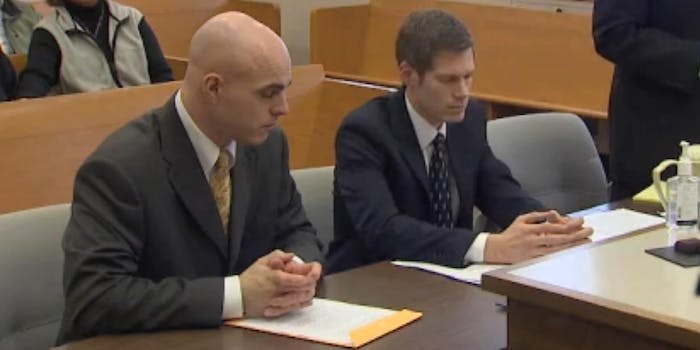 David Blackmer promised to "ruin" the life of his ex-lover.

In July 2013, a woman quarreled with her then-lover, Seattle police detective David Blackmer, at his home. The two had been dating for more than seven months, but the woman had just discovered that Blackmer, a 17-year veteran of the force, was actually married. And now she was confronting him in front of his wife.

The officer, furious that the woman had exposed the relationship, shoved her off the porch, promising that he would “ruin her life” and “get back at her.” He shortly made good on the threats, posting sexually explicit photographs of the woman online.

In January, Blackmer pleaded guilty to cyberstalking and domestic violence charges and was sentenced to 90 days in jail. On Monday, five months after his conviction, the Seattle police department finally fired him.

Blackmer, 44, began his affair after meeting the woman on an online dating site in December 2012. Following the confrontation at his home, Blackmer created a fake Facebook account where he posted explicit photographs of the woman, including some he’d snapped of her while the pair were having sex and others she’d sent at his request for “sexy” pictures, according to court documents.

“The woman told our investigators that these postings caused her embarrassment and fear,” a Seattle police sergeant said in a press conference shortly after Blackmer’s arrest.

According to the victim, Blackmer’s photos spread beyond anonymous strangers on Facebook. the victim alleged that her “mother, brother, aunts, underage children of her aunts, friends, and people in her church” had seen the photos.

“I feel the conduct was egregious, and I don’t believe the chief had any other choice in this case but termination,” Seattle Police Guild president Ron Smith told KIRO news. Blackmer had been put on paid administrative leave shortly following the arrest.