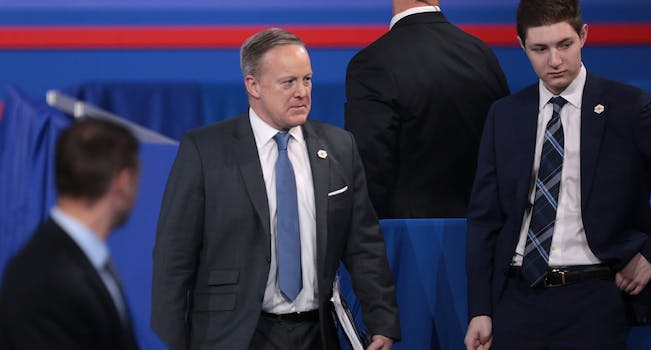 Sean Spicer is gone but the jokes live on.

Although many on left-leaning Twitter would claim to have hated former White House Press Secretary Sean Spicer, there’s no doubt they relished every absurdist moment he provided. Call it love-hate.

So, when news of his resignation broke early Friday afternoon, the social media network was downright inconsolable, as they commiserated with Spicer—lol, jk, they just kept crapping on him like they always did.

First off, they dug up this old Spicer tweet, because… well…

Then they cracked every single joke under the sun.

I feel like every time a Trump employee quits, Oompa Loompas should appear & sing a song to teach us about the perils of gluttony & greed.

And it seems to me you lived your life like a candle in the wind. pic.twitter.com/6eeW4bd5Oi

In one hand, you could feel sorry for Sean Spicer. On the other, no one fucks with dipping dots and gets away with it.

The only thing crazy about Spicer's resignation is that it took this long.

This video of Sean Spicer speaking English to the best of his ability still destroys me pic.twitter.com/k0r3nqemJy

Even politicos got in on the fun.

Wishing Sean Spicer the best of luck in all future endeavors.

We'll always have those six months of you lying to us every single day.

Sean Spicer may be gone thanks to the appointment of Anthony Scaramucci as the new White House communications director, but will always have the moments. And while the internet is happy now, they’re gonna be pretty bummed when a non-memeable press secretary takes his place.