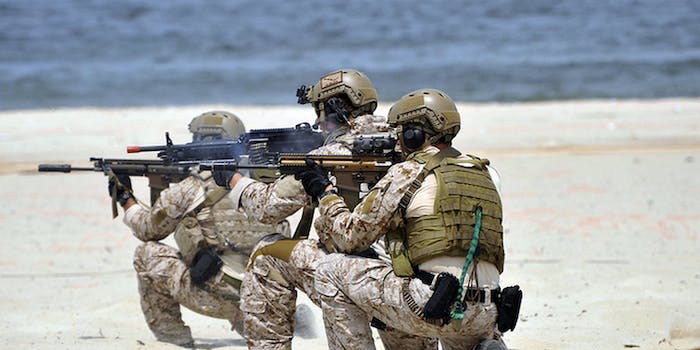 7 SEALs were reprimanded for disclosing classified information while consulting on Electronic Arts' Medal of Honor: Warfighter.

Seven members of SEAL Team 6 have been punished by the Navy for divulging classified information while they served as consultants for a video game.

The highly trained and specialized military group made headlines in May 2011 after they shot and killed Osama bin Laden. In fact, one of those reprimanded participated in that historic raid.

The game in question is Electronic Arts’ Medal Of Honor: Warfighter, a video game that lets users play and participate in military missions that are supposed to reflect reality. On Oct. 23, the same day the video game was released, EA put out a statement bragging that the storyline had been “written by actual U.S. Tier 1 Operators while deployed overseas.”

Commander David McKinney, a Naval Special Warfare Command spokesman, stated that the SEALs in question disclosed classified material and made unauthorized use of official command gear. McKinney also said that those punished “did not seek permission” to consult for EA.

According to CBS News, who first broke the story, all seven SEALs are still in active duty but will have their pay docked by half for the next two months. Though pay varies depending by rank, a May 2011 ABC News article reported that the average salary for a Navy SEAL is $54,000 a year.

The seven also received letters of reprimand, which will prevent them from getting a rank promotion.

“We do not tolerate deviations from the policies that govern who we are and what we do as Sailors in the United States Navy,” said Rear Admiral Garry Bonelli, Deputy Commander of Naval Special Warfare.

“The non-judicial punishment decisions made today send a clear message throughout our Force that we are and will be held to a high standard accountability.”

EA has not yet commented on the SEALs’ reprimand.