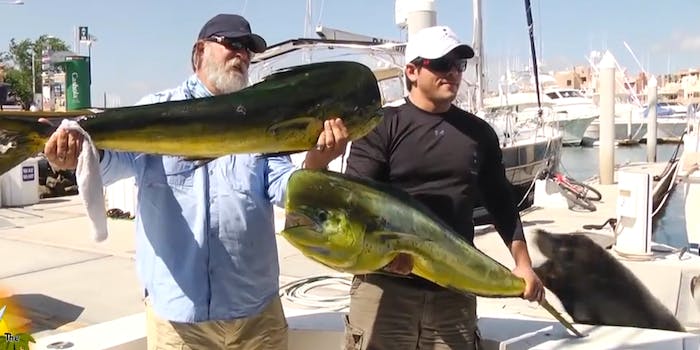 Here's why you shouldn't pose with a fish so close to the water.

Picture this: You’re in Cabo San Lucas, off the coast of Baja California Sur. The weather’s beautiful. You’re with your best buddy. And the two of you just caught two 20-pound dorado fish—two of the biggest catches you’ve ever had in your life.

You pick the fish up, pose for the camera, smile.

That’s when, all of a sudden, a third party—a slick-skinned sea lion—jumps out from the water and snatches your dorado by the tail, taking it back underwater for a big afternoon snack.

Your friend starts cackling like an idiot. Now you’re the schmuck standing on the boat empty-handed. The cameraman doesn’t know what to do. You now have to convince all your friends that you caught a fish that they’ll never eat. It’s a disaster. Your whole trip’s ruined. You wish it had rained. You wish you’d gone skiing.

It’s a raw deal, but it happened to this dude down by the Baja docks the other day. Fortunately, someone had their camera on hand to record the heist.

Given that the video appears to be promoting an upcoming TV show, there’s reason to be leave it’s at least partially staged. The sleuths at Reddit pointed out that there’s a local sea lion dubbed “Pancho” who’s regularly fed from the docks. But that doesn’t explain why the footage is on LiveLeak instead of YouTube, or the genuine look of surprise on the young fisherman’s face.