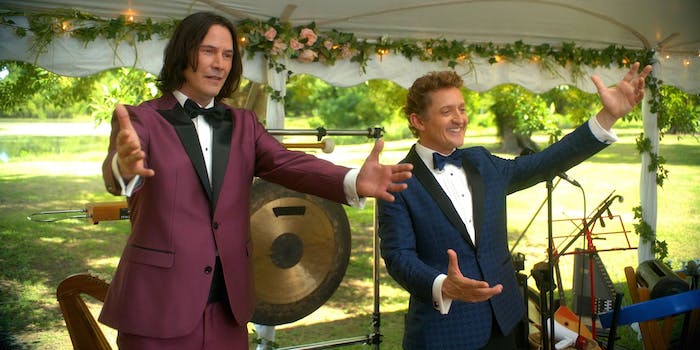 All the best trailers from San Diego Comic-Con (so far)

Now an online-only event thanks to Covid-19, this year’s San Diego Comic-Con is in full swing. Several of the biggest geek-culture franchises aren’t participating this year, including Marvel, Star Wars and the DCEU, but there’s still plenty going on. Here are some of the most exciting trailers released so far, along with some cool new announcements for shows like His Dark Materials and Star Trek!

The long-awaited Bill & Ted threequel comes out in September, and the new trailer looks most excellent, dude. Keanu Reeves and Alex Winter are joining the film’s director and writer for a YouTube panel on Saturday, so you’ve got that to look forward to as well.

This new ghost-hunting sitcom is the latest project from Simon Pegg and Nick Frost, reuniting after their starring roles in films like Shaun of the Dead and Hot Fuzz.

Season 2 of HBO’s His Dark Materials is on the way, delving into the story of The Subtle Knife. With input from Philip Pullman, the show is continuing to expand on the world of the books, including a bigger role for Will’s father John Parry. Phoebe Waller-Bridge joins the cast as the voice of John Parry’s daemon – a fun little reunion, since he’s played by her Fleabag co-star Andrew Scott. Unfortunately covid-19 quashed the show’s plans for a standalone episode focusing on James McAvoy’s Lord Asriel, but otherwise season 2 was completed on time, and the trailer looks very cool.

The Star Trek franchise continues to expand, including a kid-friendly cartoon series whose title was announced at Thursday’s panel: Star Trek: Prodigy on Nickelodeon next year. But before that we have the adult animated show Star Trek: Lower Decks in August, and there’s a new teaser for that. No new material from Discovery, unfortunately!

We’ve got plenty more to look forward to throughout Friday and Saturday, including a Charlize Theron Q&A, a Constantine reunion with Keanu Reeves (could that long-rumored sequel be announced?) and Guillermo del Toro discussing the new horror movie Antlers, which he produced with director Scott Cooper.