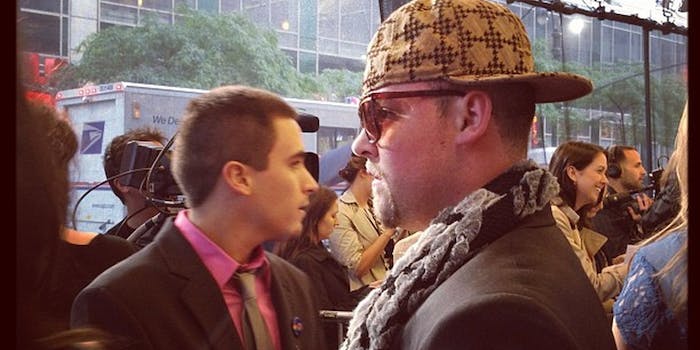 The rapper-turned-meme, real name Blake Boston, claims Instagram is blocking his hashtag from its search in an act of "meme censorship."

From time to time, photo-sharing app Instagram blocks pornographic and profane hashtags from search to help comply with its own nudity-banning Terms of Use.

Boston may cry “meme censorship,” but as far as we could tell, he is the only meme affected by Instagram’s hashtag blacklist. Searches for #doublerainbowguy, #overlyattachedgirlfriend, and even the slightly suggestive sounding #bedintruder are untouched.

The Daily Dot was unable to reach Instagram—which has 100 million users and fewer than 20 employees—for comment.

However, Phil González of the popular Instagram user community Instagramers was able to shed some light on the hashtag blocks. González said the first tags to be blocked were about sexual topics, and the blocking began in January 2011.

“Before then, it was impossible to find photos through a ‘tag search,’” he said. “When that became available, so did the possibility to find tags related to ‘delicate’ topics… and many of them disappeared.”

Occasionally, González said, Instagram has blocked a tag by mistake. Even “#Instagram”—currently the platform’s most popular tag according to Webstagram—was once accidentally blacklisted.

“I remember one day people mentioned it was impossible to tag #instagram and then recently #iphoneography, which didn’t make any sense,” he said. “I think that in these two cases, the tags overloaded the servers with information Instagram didn’t think was relevant.”

#Instagram and #iphoneography are back, but it’s not yet clear whether blocking #scumbagsteve was also a mistake.