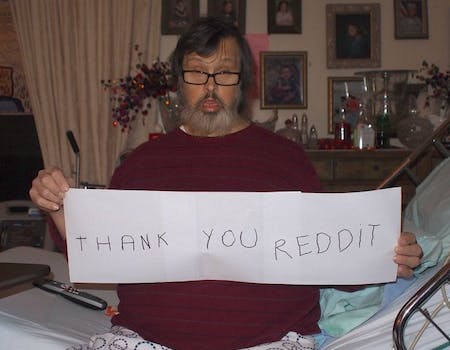 But the cards likely did wonders for his last days.

Scott Widak was dying from liver cancer, and all he wanted were some postcards. Who could help? Widak’s nephew, Sean O’Connor, had an idea: Social news site Reddit. And it worked.

After O’Connor posted about his uncle to the site last March, redditors delivered, showering the 47-year-old man with Down syndrome with hundreds of postcards from around the world.

On Saturday, Widak died. A day later, O’Connor returned to Reddit with a message of thanks.

“Thank you reddit for thinking of my uncle,” O’Connor wrote in a post that went to the top of r/pics Sunday. “He will surely be missed.”

Widak received more than 1,000 letters and gifts from places as varied as Japan, Sweden, Ethiopia, and Jordan, O’Connor said.

I’ve watched too many people nearing the end of a chronic condition. One of the things I hate the most is that for a lot of that time, their bodies are too weak to do much, but their mind is still fine. They spend much of their last days/weeks just waiting to die. This kept him engaged, with something to look forward to besides his own decline. I’m sure knowing that many people cared about him did wonders for his spirit, as well. Everyone should be able to meet their end like this.

O’Connor posted an Imgur album along with the update, chronicling the amazing array of gifts and letters Widak received.

“His general cheerfulness did decline a bit as he got more ill,” O’Connor wrote, “but his happiness didn’t fail to shine through at times no matter how sick he got.”

Be sure to view the album below.