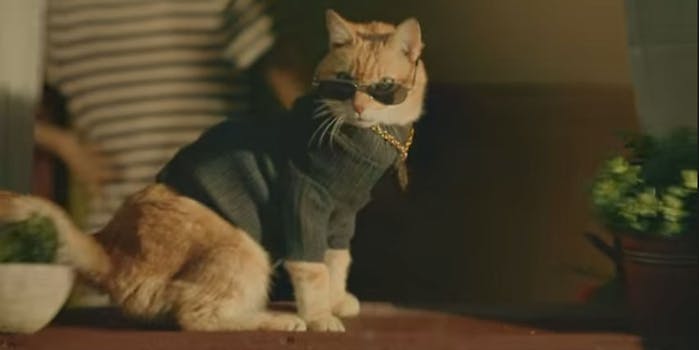 For a cat, promoting proper spaying and neutering takes a lot of balls. Or not.

For a cat, promoting proper spaying and neutering takes a lot of balls. Or not.

In the GiveThemTen.org’s new YouTube ad campaign, we are introduced to Scooter the Neutered Cat. An orange tabby wearing bling and a sweater, he defiantly struts around an alley, high-fiving fellow cats and even a dog to celebrate his newfound impotency. Throughout the video, we are treated to a bizarre song that includes the term “hip spectacles, no testicles” and also compares two balls of yarn to Scooter’s former anatomy.

Had he been available at the time of filming, former Price Is Right host Bob Barker would have high-fived him as well.

The video conveniently leaves out Scooter trying to lick his scars and moaning in guilt-inducing agony, which is probably what really happened following his neutering.

Scooter and friends should be thankful that there isn’t a kitty version of Hobby Lobby.