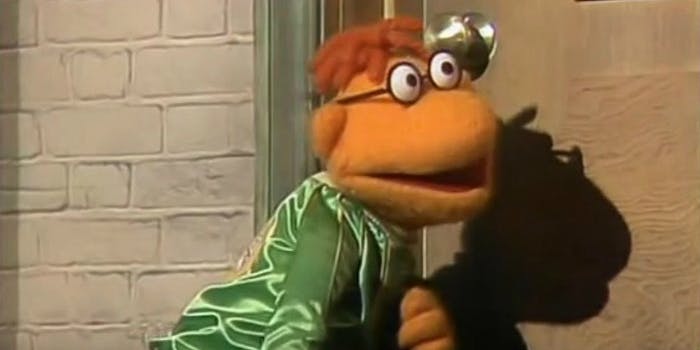 Eminem mashup proves Scooter is the most underrated Muppet

Kids today don't appreciate Scooter the way they should.

Scooter’s name never crossed their lips until I specifically mentioned him—and then they just kind of shrugged their shoulders. This, of course, is neither surprising nor particularly disappointing. Scooter is a minor character in the Muppets universe, and most would say he deserves neither our love nor our scorn.

But put him in an Eminem mashup video, and Scooter comes alive in a way you’ve probably never noticed before.

But here’s the thing about Scooter (who has finally gotten his Muppet mashup due): He’s underrated as a Muppets fave. Not severely underrated, but make no mistake, people do not talk enough about his attributes. He’s considered the backstage gofer for all the so-called important Muppets, but he does ever so much more than that.

He makes  the guest stars of the old show—legends like Don Knotts, Milton Berle, Dom DeLuise, and Madeline Kahn—comfortable backstage. He’s a solid presence in all of our lives, the kind of Muppet who puts us at ease and never offends. We know exactly what we’ll get from Scooter. He’s not going to surprise or shock us. He’s just going to… be there. And in this crazy, mixed-up world, that’s not a terrible persona.

Just watch him in his element as he solves problems, calms people down, and never riles up anybody at all.

But talking to my children convinced me that we might never get to the point where Scooter will receive the accolades he deserves. After all, before I brought up Scooter’s name, one of my kids told me that he really enjoyed Kermit’s Robot. When Kermit’s Robot is getting more positive press than Scooter, it might be time to consider hanging up the Starter jacket and the clipboard for good.

Here’s exactly how part of that conversation went:

And with that, the Scooter conversation was over; the kids returned to doing whatever they were doing before I interrupted their lives to discuss a Muppets character they don’t really care about. But they should care and so should we. Even if we almost never think about him, Scooter is worthy of our love. Like a fondue set in the kitchen—rarely used, never really considered—Scooter still has a purpose in this world. He matters.

Most of the time, we just don’t care to recognize it.