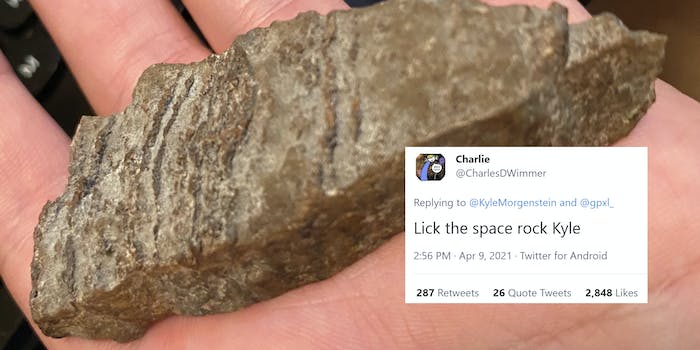 What does the planet Mars taste like? Inquiring minds want to know. Texas PhD student Kyle Morgenstein learned this firsthand when he tweeted an educational photo of a Martian rock sample last Friday—and the prevailing response was people asking him to lick it.

Morgenstein has a degree in aerospace engineering from MIT and (understandably) enjoys tweeting about space stuff. The space rock in question is actually part of a meteorite. So far, all Mars missions like NASA’s Opportunity rover have been one-way trips, with no ability to return home with physical samples. However, plenty of Martian meteorites have already made their way to Earth, giving scientists something to study. Or in this case, lick.

Some geologists do lick rocks for scientific purposes, such as testing their texture or salt levels. But let’s be real here—most people responding to Morgenstein’s tweet just want to know what Mars tastes like. They started using the #LickTheSpaceRockKyle hashtag to egg him on, even creating a Change.org petition.

Eventually, they won. Morgenstein posted a video of himself licking the space rock. The verdict? “Needs salt.”

As a lab sample of a meteorite rather than a farm-fresh rock plucked from the Martian surface, Morgenstein’s space rock probably doesn’t make for an authentic gastronomic experience. Geophysicist Mika McKinnon estimates that the Martian surface might taste “bland with a hint of bloody seawater” due to a combination of basalt, iron-rich minerals, and perchlorates. But we’ll have to wait until 2031 to find out for sure, when NASA’s first return mission from Mars is scheduled to land back on Earth.