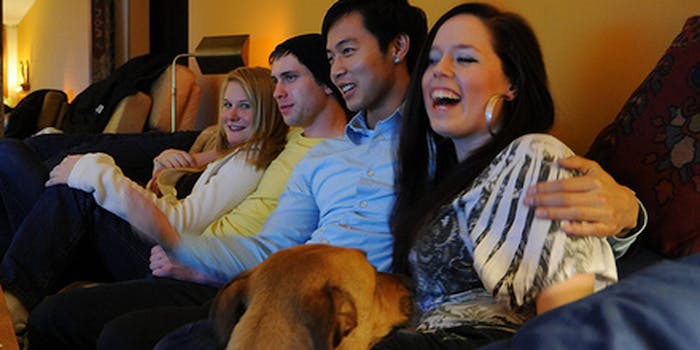 Wait, was there something good on TV last night?

Wait, was there something good on TV last night?

This morning and last night, social media feeds everywhere are bursting with Breaking Bad. Which is awesome, if you’re one of those up-to-the-minute fans. And totally disappointing, if you’re into the show but taking advantage of Netflix to indulge in binge batches to catch up.

It used to be that the only way to ruin your favorite show was to DVR it and wait too long to watch it. That was on you: you snooze, you get spoilers from your barista the next morning as you order your latte. It was a fact of life. But now, not even watching the show live can save you from social media: casually check your Facebook or Twitter feed, even a harmless glance at Instagram, and boom—you’re staring at the juicy details of what is ABOUT TO HAPPEN on your favorite show. Whether it’s BitTorrent copies showing up online (sometimes a day or two before shows air) or your poor choice of living in the wrong time zone, there’s just no avoiding it anymore: someone is going to see it before you, and they are not going to keep it a secret.

How did this happen? When did water cooler chat take to Facebook mere seconds after the plot thickens on your favorite shows? The truth is, it’s been slowly turning this way for years, and each and every time some TV executive hears a new buzzword, say “livetweeting” for instance, they’re compelled to shake the tree and everyone feels like they’ve gotta get in on it. But while it’s fair to say that livetweeting has been around since Twitter launched, and Instagram has given us a real-time play by play of our friends food choices and spoilers galore since 2010, posting the spoiler has always been a matter of choice.  And let’s face it, some people choose poorly.

It’s become a matter of debate at dinner parties and occasionally leads to fist fights: to tweet or not to tweet the spoilers of a TV show. And we’re not the only ones. Even those who are on the screen have wrestled with these same ethical dilemmas. Spoiler blabbing takes on a whole new dimension when it’s coming straight from one of the show’s characters

I am not embarrassed to admit that my favorite show currently running is Wilfred on FX, the high concept, dark (and sometimes blue) comedy about a suicidal lawyer who sees his neighbor’s dog as a wise-cracking Australian guy in a dog costume. I know it’s not for everyone, but I love it. Fiona Gubelmann (who plays Jenna on the show), is one of the actors involved who live tweets during the episodes as they air. For her, it’s one more way to have a real connection with your audience:

“FX asked if we would be interested in tweeting various things for the show, including fan interaction while the show aired,” Fiona said. “I was fascinated by this because I was trained in theatre and loved the audience aspect of the medium. Twitter enabled us to connect directly with our fans in real time. So we did it, and it was amazing. I instantly loved it. But a pivotal moment came when our west coast tweeters got upset with me for tweeting spoilers during an east coast airing of Wilfred. I had quite a few slightly hostile remarks. I felt really bad about spoiling the show for them, so I very quickly had to adjust my tweets, making sure that I wasn’t giving away great punch lines, jokes, and even episode/series turning points. But once the west coast episode is airing, the gloves are off.”

Fiona says her approach to live-tweeting episodes of Wilfred has evolved over time.

“Towards the end of Season 3, there were a couple times that I warned followers who couldn’t turn in live to avoid Twitter until they saw the episode. Major events were unfolding and I didn’t want it to be ruined for our fans. Wilfred fans are the best and I love them. They have so much excitement and support for our show and I don’t want to take away their enjoyment of it by tweeting anything that could ruin it.”

Not everyone is as considerate and careful as Fiona, which, aside from bringing up deep and unanswerable questions about our communal desire to share secrets (see: wikileaks!) leaves us asking ourselves the eternal existential question: “How can I just watch TV?”

The first thing everyone wants us to remember is that it’s just a TV show.  But when you’re 5 seasons and 50 or 60 hours deep into something as emotionally powerful as, say, Breaking Bad or The Sopranos, that kind of pat on the head isn’t helping much. So what to do? Here’s a few tips.

How to not let social media spoil your favorite TV show:

1) Remember that time is not on your side.

The media is a leaky boat, and the longer you wait, the more it leaks and the further those leaks spread. The Daily Show might write a joke about something you missed. And slew of Facebook posts could wind up ruining your weekend. So make time, and take care of business.

It’s a little extreme, I admit, and sequestering yourself into cyber-exile for the first time can be downright traumatic. But definitely it’s one way to be sure to preserve the purity of your viewing experience. After you’ve turned off your phone and computers, try to remain calm. If you’re as compulsive as I am about needing your two-screen experience, I recommend having a magazine handy to give yourself a substitute ‘screen’ to look at. Hopefully you’re just trying to  make it through one episode. Until the show is over.

3) Tech tools to the rescue.

If cyber-exile is just too intense for you, there are a few tools you can employ to selectively redact your personal newsfeed. Tools like Silencer or Twivo are browser extensions that can weed out tags and keywords from your Twitter and Facebook feeds. CommentBlocker is a similar extension that specifically blocks user generated comments. These tools, however, will only take you so far. You still have to remember to turn them on, and reprogram your alarm clock to not blast the morning talk guys who just love to talk about what happened on TV last night.

However you choose to deal with the issue, it’s out there. Most of all, remember to be considerate and hope everyone else around you is too. Those of you who choose to blab the spoilers—and you know who you are—are sure to find yourselves in a special ring of hell watching reruns of the Fake Housewives of Cleveland for all eternity.