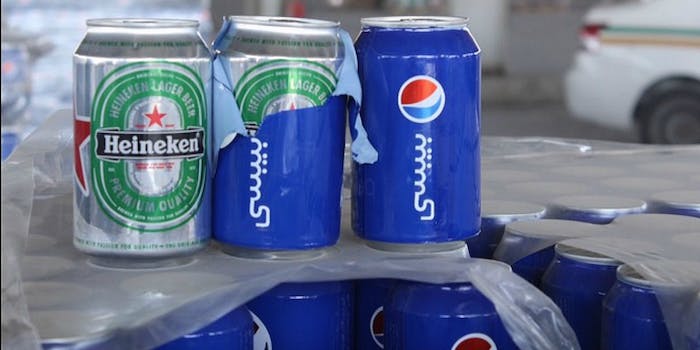 Saudi Arabian caught trying to smuggle 48,000 cans of beer made to look like Pepsi

How badly do some people want to get alcohol into Saudi Arabia, a county that doesn’t allow it? Some people allegedly will go to the lengths of disguising 48,000 cans of Heineken to make them look like a total of 576,000 ounces (17,034 liters) of Pepsi in order to get them through customs.

Unfortunately for those who will do whatever they can to get their lips around a frosty cold beer, the smuggler was caught trying to enter Saudi Arabia from the United Arab Emirates at the Al Batha crossing, according to the Saudi website, MBC.net (via the International Business Times).

“A truck carrying what first seemed to be normal cans of the soft drink Pepsi was stopped, and after the standard process of searching the products, it became clear that the alcoholic beers were covered with Pepsi’s sticker logos,” Al Batha border General Manager Abdulrahman al-Mahna said, via Al Arabiya.

While you might think the Pepsi scam was a plot doomed to fail, there have been even more interesting attempts to evade the prohibition laws of Saudi Arabia. Such as the pair of pants that could hold 12 bottles of liquor—that dude was caught also.

As Al Arabiya wrote, “Al-Mahna also added that the latest attempt is one of many new innovative ways smugglers are thinking of but that his men ‘are always ready and alert to catch’ the extraordinary efforts into hiding contrabands into Saudi Arabia.”

Unfortunately, no one in the county will be drinking to that.