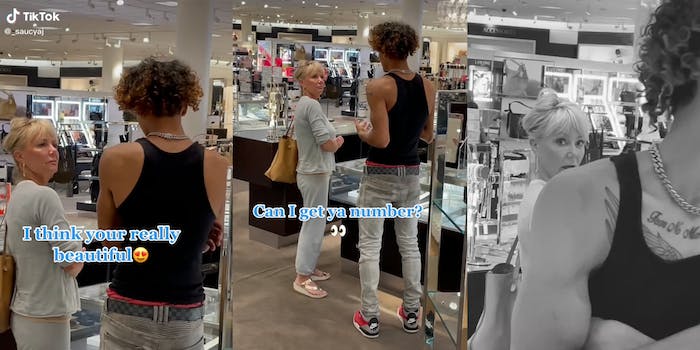 ‘Can I get your number?’: TikToker’s ‘saucy’ pickup technique goes viral, sparking debate

Are his TikToks legit though?

Arguably there’s no such thing as an effective pickup strategy. If your chosen target thinks you’re cute, you can get away with using majorly corny pickup lines. But if they’re not interested, then no amount of clever seduction techniques will work. You can see this play out in a couple of viral clips from TikToker Saucy AJ, the self-proclaimed “sauciest guy on this app.”

The TikToks show him approaching women in a mall, each time using variations of the same line: “Excuse me, I think you’re really beautiful. Can I have your number?” When a woman responds that she has a boyfriend, he asks, “When’s the wedding?” “What?” she asks. “Oh, so it’s not serious,” he jokes. He winds up getting their phone numbers within seconds.

One of these videos, the TikTok where Saucy AJ flirts with a middle-aged woman in loungewear, has racked up 10 million views. But opinion is divided regarding his pickup technique. A lot of people took this TikTok at face value, joking about how hot the woman is, and the way she looks Saucy AJ up and down when he walks away. On the other hand, some commenters definitely think his TikToks are fake.

“Wait I think he’s using the same girls in these vids,” reads one comment. “When all of these are staged,” reads another. If you pay attention, you’ll notice that the videos share a stilted tone, following an unnaturally similar script. They also don’t look like they’re filmed with a hidden camera, meaning that Saucy AJ’s camera person is just standing a few feet away with their phone out. Surely the women would notice they’re being filmed.

This kind of quasi-real skit is eternally popular on vlogging platforms, supposedly revealing sexy truths about how men and women interact. We’re meant to believe that Saucy AJ is so smooth that he can just walk up to women and get them to cheat on their boyfriends with a 20-second pickup script. But in reality, if a guy approaches a girl in a public place and she tells him she already has a boyfriend, it probably means she wants the guy to leave her alone.