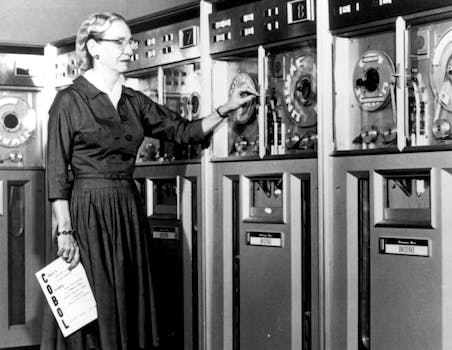 Why Microsoft can’t pay its female employees in ‘karma’

Maybe she’s born with it, maybe it’s karma. At least, that’s what Microsoft CEO Satya Nadella seemed to imply last week when he suggested that women shouldn’t ask for raises, instead trusting in “karma” to determine their salaries. The comment promptly resulted in Internet uproar, which led him to retract the comment, claiming that he had been “inarticulate.”

That’s certainly one way to put it. This year has marked a swirling series of controversies and ongoing discussions on the treatment of women in the tech industry, including the abuse of women in the gaming industry, women engineers speaking out, and inequalities in tech salaries. Oddly enough, Nadella’s remarks were made specifically at a conference dedicated to women in computing and named after Grace Hopper, one of the pioneers of modern computing—who also happened to be a women.

Understandably, the audience and the Internet were not impressed. At the New York Times, Claire Cain Miller took on the results of a study exploring women and wage negotiation in the workplace, noting: “They found that people penalized female job applicants more severely than men for negotiating. Men penalized women more than men for asking, while women penalized both men and women. They attributed it in part to stereotypes about appropriate masculine and feminine behavior.”

Nadella’s conference comments reinforced that finding and were a reminder of the chilling effect on women in all industries, including science and technology. Women are supposed to be meek and submissive in the workplace, as noted, hilariously enough, in a New York Times guide to getting a higher salary. “[W]hen women advocate for themselves, these experts say, some people find it unseemly, if on a subconscious level,” Tara Siegal Bernard wrote. Women are punished for requesting raises by both male and female bosses, remarkably: This is how ingrained the notion that women are supposed to wait for “rewards” rather than asking for what’s theirs is embedded.

Her detailed guide is certainly well-intentioned, providing step-by-step suggestions for women who want to negotiate for better salaries or raises, but it’s a grim way to look at it: Instead of confronting the notion that women should be quiet in the workplace, it insteads recommend that women tiptoe around financial issues. No matter what Sheryl Sandberg says, leaning in is not an effective strategy.

As former New York Times executive editor Jill Abramson is painfully aware, asking to be compensated on par with your male predecessor—equal pay for equal work—can result in being fired. While the Grey Lady backed her decision with a number of defenses including arguments that Abramson lacked the experience and credentials needed to offer the same compensation, it’s notable that the paper thrived under her hand in an era when print media are struggling, and that despite enduring abuses in the newsroom, somehow she’s the one who’s been made out as the difficult personality. In a piece for Bustle, Natsha Geiling sums it up:

Abramson did all of the things books and think pieces have told us to do. She was confident: she once reportedly called managing editor (now her replacement) Dean Baquet into her office to demand more interesting news coverage. Baquet is said to have responded by punching a wall in front of the entire newsroom, and yet Abramson is the one called ‘bitchy’ or ‘pushy.’ Baquet, by turn, was lauded as ‘a rare combination in journalism’ of ‘a tough reporter and also a nice person’ in TIME. If that seems like a serious double-standard, that’s because it is a serious double-standard.

Commentator Amanda Hess had sharp words for the notion that women should bend to the rules of a male-dominated society and workplace when it comes to requesting raises:

The conventional wisdom is that it is the female employee’s responsibility to navigate the sexist demands of her office, because her employers have no incentive to make it any easier for her to get a raise. ‘We are asking women to juggle while they are on the tightrope,’ Carnegie Mellon University professor Linda C. Babcock told the Times. ‘It’s totally unfair because we don’t require the same thing of men. But if women want to be successful in this domain, they need to pay attention to this.’

It is also, it would seem, a woman’s responsibility to remain “nice” while politely asking for a raise, as though it is some sort of massive favor that should be granted magnanimously, rather than her due as someone who has put in her time at a company and added value. Women are consistently offered less than men at the start of salary negotiations (and are less likely to ask for more money at the start, as Maria Klawe, who was moderating the discussion in which Nadella made his bizarre comment, pointed out). They’re also less likely to be considered for raises, remaining consistently behind male members of the workforce.

Culturally, women receive very contradictory messaging: They aren’t making as much money as men, so they should ask for money. But they should do so in a nice, nonthreatening way to avoid scaring the horses; if they can’t frame their requests in a way that satisfies their bosses, they won’t be granted raises. Clear evidence shows that women who ask for raises often don’t get them, or are actively penalized for it, unless companies take a proactive approach to supporting their women employees.

Nadella’s comments are a reminder of the often clueless tack that men in the tech industry take when confronted with issues of the gender gap—not just in terms of wage disparities, but also diversity in the workplace, fair treatment of parents with young children, and more. Many men in the tech industry haven’t had to think about the issue, and find it extremely threatening to have been abruptly confronted with it in full flower this year, as women find and exercise their voices in large numbers. Suddenly, men are confronting the ugly truth of their industry, and they’re being forced to question themselves when it comes to things like whether they earned their jobs on merit or by virtue of their social positions.

Confronting social change is often frightening for those at the top. In the tech industry, where the stakes can be extremely high, there may be a temptation on the part of many men—especially CEOs, who are in no small part accountable for what happens in their firms—to elide issues by making them the responsibility of the affected groups. Yet, it’s still men in tech who have the most power.

They could use that power for good, by working in solidarity with women to improve diversity, correct wage inequalities, provide day care facilities and other support for parents (mothers are often tasked with the majority of the burden for childcare), and more. Or they could use it for evil, by telling a room full of women in computing that they should sit down and be silent instead of reaching for what’s theirs.