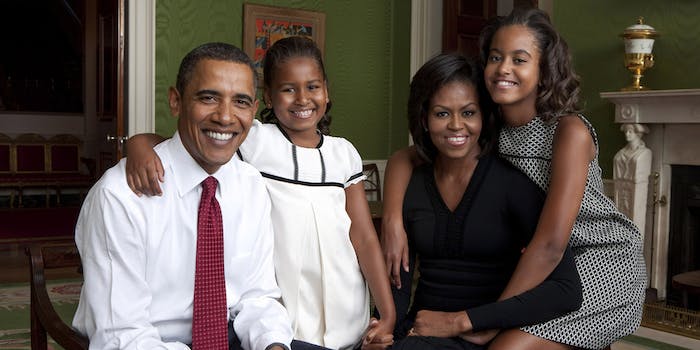 As if being a kid weren't hard enough.

Anyone criticizing Sasha and Malia Obama needs to do more than just check their partisanship. Instead, they might be well-advised to go one step further and take stock of their philosophy on child-rearing. Although it may be tempting for some to treat the Obama daughters like political figures, they are in fact child celebrities, saddled with all the terrible burden that comes with that title, and should be viewed as such.

This lesson was brought home last week when Elizabeth Lauten, the communications director for Rep. Steve Fincher (R-TN), wrote a Facebook post criticizing the Obama daughters for their demeanor during the event. “I get you’re both in those awful teen years, but you’re a part of the First Family, try showing a little class,” she opined, adding that “then again your mother and father don’t respect their positions very much, or the nation for that matter, so I’m guessing you’re coming up a little short in the ‘good role model’ department.”

Lauten resigned on Monday in response to the scandal, although not before facing a great deal of criticism herself. “Was that a scolding on what constitutes class from the spokeswoman of an elected official as she publicly blasted minors on her Facebook page?” wrote Demetria L. Lucas of the Root, “Are you behaving with class when you overanalyze and insult teenage girls?” Joe Walsh, a former congressman from Illinois and currently a talk radio host, concurred, telling the Chicago Tribune that “Elizabeth should have kept her mouth quiet.”

While it’s easy enough to take a stand against adults who pick on tween and teenage girls, it’s important to understand why someone like Lauten thought two famous children would be fair game at all.

To answer this question, one must look at the broader expectations we made for all child celebrities today. “Nearly every teenager rebels, but most of them have about five people they need to answer to when they screw up,” explained Mara Wilson (star of hit films like Mrs. Doubtfire and Matilda in the ‘90s). “Now imagine if you, as a kid, had millions of people watching your every move.” Because principle applies to First Kids just as much as it does young actors, it has precipitated many awkward White House debacles in the past.

“Jenna [Bush, daughter of George W. Bush] would purposely try to lose her protection by going through red lights or by jumping in her car without telling agents where she was going,” wrote Ronald Kessler in In the President’s Secret Service: Behind the Scenes With Agents in the Line of Fire and the Presidents They Protect. Chelsea Clinton has also discussed the difficulty of going through her teenage rebellion years while her father was president, recalling that her parents were “were very firm about me always getting my homework done” and kept close watch over when she went out to see concerts, movies, and shows (she hasn’t mentioned her reaction to Rush Limbaugh’s infamous joke about her physical appearance).

Amy Carter, meanwhile, took the Bush daughter approach by brazenly refusing to follow the rules, most notably when she responded to a reporter who asked her to give advice to the children of America with a simple: “No.” Even Quentin Roosevelt (son of Theodore Roosevelt) attracted press attention by pulling pranks with his best friend, Roswell Pickney.

Of course, unlike Amy Carter or Quentin Roosevelt, Sasha and Malia Obama live in the Internet era, which exacerbates many of the problems faced by their predecessors. Not surprisingly, this has caused President Obama to attempt to curb their social media interaction. “I’d worry about Facebook,” he said during an interview with MTV. “I know the folks at Facebook, they’ve revolutionized social networks. But Malia, because she’s well-known, I’m very keen on protecting her privacy. She can make her own decisions as she gets older, but right now, for security reasons, she does not have a Facebook page.”

As the uproar over Lauten’s comments shows, though, it simply isn’t possible to completely stave off the consequences of the digital age. Several news sites have already characterized the Facebook posts as a form of cyberbullying, and with good reason: Without the Internet, it is unlikely that Lauten would have had a forum with which to publicly attack these two children, and indeed may have never even seen the offending photograph in the first place. Before the Internet, celebrities of all ages had more control who had access to them and what content of theirs was available to the public. Thanks to social media and the explosion of blogs, however, anyone is capable of generating content and shaping public narratives about people in the public eye.

While this is stressful enough for any celebrity, it must be doubly so for children who are expected to serve as good examples for kids everywhere. When Lauten attacked the Obama daughters by claiming their parents weren’t good role models, she was speaking to an unspoken assumption about Sasha and Malia’s responsibilities to the American people. Even though neither girl ever sought to become a public figure, Lauten projected her own expectations onto them, essentially justifying her attempt to humiliate them on the grounds that they had failed to live up to the standards she had taken it upon herself to impose.

In an era before the Internet, this cruelly microscopic gaze would have been confined to those with the resources to print newspapers or buy air time, but because the Internet allows anyone to offer their opinion, Americans have grown to assume that their opinion is automatically worth offering. Even if that opinion is nothing more than a mean-spirited attack on two children not even old enough to remember a world without the Internet.

This isn’t to say that parents can completely shield their children from unfair humiliation. Indeed, they’re often the cause of it, as Margaret Truman learned after her father (President Harry Truman) penned an angry letter to a music critic who had panned one of her performances. “Some day I hope to meet you,” he wrote. “When that happens you’ll need a new nose, a lot of beefsteak for black eyes, and perhaps a supporter below!”

As Truman amply demonstrated, presidential fathers are fully able to make their offspring feel mortified using the tried-and-true methods available to all parents. There is no need for us to make things worse for them.