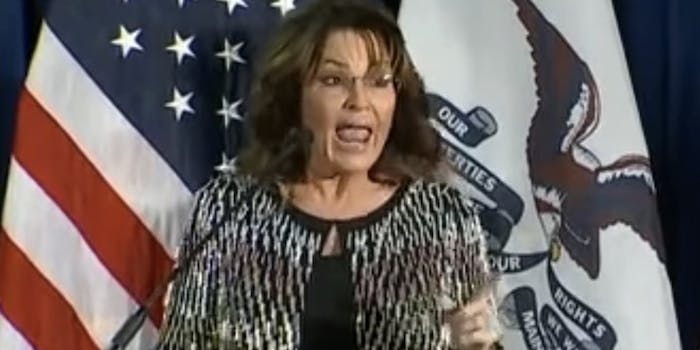 She doesn't have a law degree, but whatever.

Sarah Palin, former vice presidential candidate and current Donald Trump surrogate, has found yet another way to stubbornly remain in the public eye: People reports she’s signed a deal to preside over her own “Judge Judy-style TV courtroom.”

Palin has many qualifications for the job of a television judge whose decisions would be contractually binding for the parties involved. She has served as a local TV sportscaster, mayor to a town of 5,000, and governor of a non-contiguous U.S. state. She also has experience in the commercial fisheries industry, and has read all of the newspapers and magazines that have been in front of her over all these years.

Montana-based production company Warm Springs, who will be producing the pilot of Palin’s court show, told People that the former governor’s “telegenic personality, wide appeal and common sense wisdom make her a natural for this kind of format.”

There is one qualification Palin doesn’t have, in terms of serving as a judge: She doesn’t have a law degree.

That handicap hasn’t stopped elected judges around the country, though, many of whom aren’t required to have any legal education at all. And look how well everything has worked out for them! (According to a New York Times exposé about corrupt local judge magistrates in New York, it’s been absolutely disastrous.)

People‘s sources say that litigants could be trusting their minor legal disputes to Palin’s “common sense wisdom” as soon as 2017. The next step is to film a pilot and sell it to a network.

Just because Trump has replaced Palin as the colorful outsider politician beloved of white America doesn’t mean she’ll disappear from your TV without a fight.