We need our prisoners to have more Internet access—so we can begin to truly understand our jail system (and its costs).

The United States has undoubtedly advanced in enormous ways in the past quarter century. The technology that people take for granted today didn’t exist back in the late 1980s. But these advancements are still powerfully striking to me—perhaps more so than to most others in society, and for good reason.

Most people witnessed this evolution of technology, and the dawn of the Internet age, in incremental stages. They gradually experienced changes such as monochrome to color monitors, dot matrix to color printers, dial up to high speed Internet access, wires to wireless, Yahoo! to Google. I had very different experiences. Bad decisions I made during my early 20s led authorities to remove me from society in 1987. For the next 25 years I lived locked inside federal prison, without access to the Internet or other technological advances. Authorities released me last August. Since then, I’ve immersed myself in technology, trying to come up to speed with all that has changed since the Kodak years turned into the Instagram years.

Federal prison authorities would argue that they had good reason to keep other prisoners and me from access to the Internet. They determined that technology represented “a threat to security.” As a consequence, they published disciplinary codes that prohibited prisoners from participating in technological advancements that so many others in society took for granted. Accessing the Internet or a cell phone was frequently charged as a “Greatest Severity Prohibited Act,” a breaking of the rules with the same level of disciplinary infraction as rioting or taking hostages. 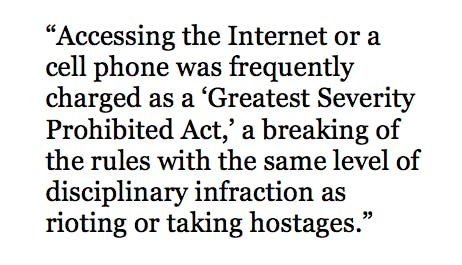 When authorities prohibited access to the Internet for people in prison, they simultaneously infringed upon the rights of netizens and citizens alike. In this day and age of transparency, taxpayers should have access to more rather than less information. Certainly, citizens should know what goes on inside America’s massive prison system. After all, numerous publications have reported that America’s prison system swallows more than $75 billion in taxpayer funds each year. Those enormous expenditures pull financial resources from the educational systems, health care, and social services that influence the lives of all Americans. Since the system takes up such an enormous amount of taxpayer resources, taxpayers should have access to firsthand, real time information about prison and prison life. If I had been able to access the Internet during my incarceration, I could have documented all that I observed and experienced in real time.

That type of information would give citizens a better understanding of whether we are making the best use of our nation’s very expensive prison system. The pursuit of justice requires illumination, but in reality, few people know what goes on inside America’s prison system once the prisoner is taken away. That isn’t only my position. Justice Anthony Kennedy said the same thing when he addressed the nation’s lawyers during his keynote speech to the American Bar Association. 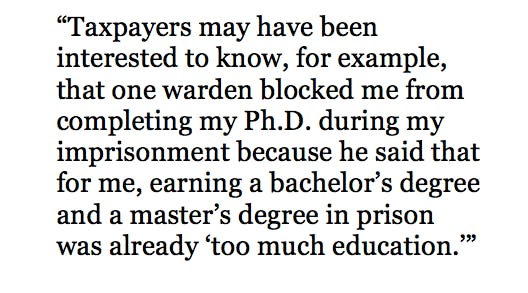 Access to the Internet would also open up opportunities for America’s 2.2 million prisoners to keep taxpayers more informed about policies inside our nation’s prisons. Taxpayers may have been interested to know, for example, that one warden blocked me from completing my Ph.D. during my imprisonment because he said that for me, earning a bachelor’s degree and a master’s degree in prison was already “too much education.”

Taxpayers may want to know the fact that while research suggested that family and community ties lowered recidivism rates, prison administrators routinely erect obstacles that led to the destruction of families and communities. I’d hope that taxpayers may also want to know steps we can take as an enlightened society to better prepare more offenders to emerge from prison as law-abiding, contributing citizens. The more information we all have, the better able we would be to assess the use and value of our prison system.

If prisoners had access to the Internet, they could blog about the volatile incidents that routinely blow up around them. In my book, Earning Freedom: Conquering a 45-Year Prison Term, I wrote about a violent prison gang inside of the United States Penitentiary in Florence, Colorado. It may not surprise anyone that a violent prison gang existed inside a high-security penitentiary. What might surprise citizens, however, was that only prison guards were allowed to join “The Cowboys” prison gang. Eventually, seven of those prison guards were convicted in federal court and sentenced to prison themselves for their role in beating and choking handcuffed prisoners, mixing waste into the prisoners’ food, and threatening other prison staff who objected to their actions.

A different kind of scandal erupted at a federal prison in Tallahassee that confined female offenders. Several rogue male prison guards bribed female prisoners with contraband for sex. If the women wanted to stop, the guards intimidated the women by threatening to transfer them far away from their families unless they continued. 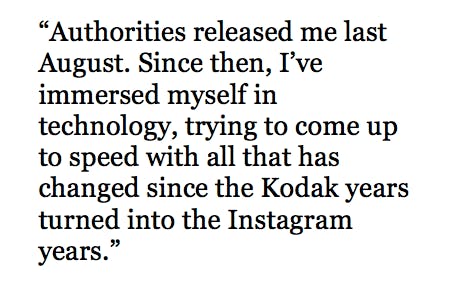 Allowing prisoners access to the Internet—to blog, to email, to write about their experiences—would almost certainly help us learn much sooner about these violent and reckless abuses of power, and perhaps even help prevent them from happening. Outside prison doors over past 25 years, the ubiquitous presence of video cameras has gone a long way toward reducing police brutality. That awareness advanced prospects for justice. Rodney King incidences are now, we hope, less likely to occur, because we have created a nation of reporters with cell phone cameras.

Prisoners should be encouraged to publish more about the journey of imprisonment, so that we can bring more transparency to a system that has locked millions of people up in cages. We need to encourage more people in prison to connect with society; the Internet does this. Fostering that connection might inspire more prisoners to reconcile with society. Transparency could debunk prison myths, reduce intergenerational recidivism rates, and lead to more openness about steps we could take to prepare more offenders for success upon release.

Numerous media outlets such as Bloomberg and the New York Times have published extensively about America’s commitment to mass incarceration. They’ve written about the fact that United States has less than 5 percent of the world’s population, but 25 percent of the world’s prisoners. We have incarcerated more people per capita than any nation on earth, at 730 people per 100,000. The Department of Justice reports that our prison population exceeds 2.2 million people. Our incarcerated population is higher than the population for the city of Houston. Some scholars like Professor Michelle Alexander argued that prisons have become “The New Jim Crow,” locking up people of color and the poor at far higher rates than the privileged.

By blocking the prison population access to the Internet, few people who haven’t experienced imprisonment can understand why our country’s prison system is such an abysmal failure when measured by recidivism rates and cost.

Without a doubt, some people are predatory and belong in prison. Good reasons exist to block some prisoners from access to the Internet. But when public policies lead to millions of people being locked in American prisons, it makes sense to make those prisons more transparent as well. By encouraging people in prison to document their experiences and observations, more citizens would have an opportunity to assess the nature of our nation’s commitment to mass incarceration.

We have handicapped our incarcerated citizens in enormous ways by prohibiting them from accessing the Internet. When I returned to society last August, I had never sent an email, never watched a YouTube video, and never accessed Google. Fortunately, I read extensively throughout my imprisonment and worked hard to educate myself. Those efforts proved useful, as I was able to learn enough about the Internet to advance my career. Sadly, other people I’ve met who emerged from prison after long periods of time don’t know anything about the Web. They were are scanning classified ads in newspapers, because they are too intimidated by computers.

As a man who served 9,135 days in prison, I’ve never doubted that administrators could provide access to the Web while simultaneously introducing security precautions that would protect society. Their refusal to do so was another piece of evidence, in my eyes, that administrators didn’t have any interest in advancing our nation’s prison system. They preferred the status quo—of warehousing humanity, separating both the body and the mind of the prisoner from society. 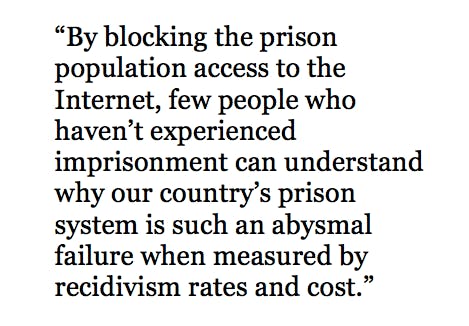 To think that our nation’s system of “corrections” has anything to do with preparing offenders for law-abiding, contributing lives upon release is akin to thinking that tobacco companies truly had an interest in helping people to stop smoking. Providing Internet access in prison would open up many new opportunities for making our prisons more transparent. Taxpayers would learn more about why our nation’s commitment to mass incarceration has been good for the prison industrial complex, but bad for society as a whole.

These censorship policies don’t stop at just inmates. The Bureau of Prisons apparently didn’t only intend to limit prisoner access to the Internet while people were locked in federal prisons, but also to muzzle prisoners as they transitioned to the quasi-liberty of being released to a halfway house. The Bureau of Prisons made national news recently, when it revoked Daniel McGowan’s status of conditional liberty because he published an article on the Internet. 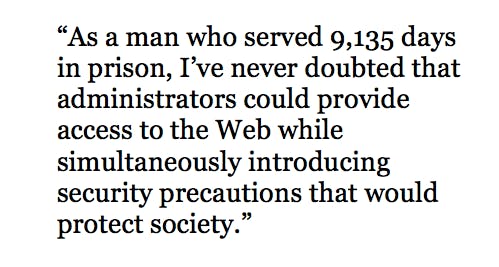 Mr. McGowan served time for “environmentally motivated property destruction,” a crime that the government perceived as an act of terrorism. He was released to a halfway house, presumably so that he could begin his transition into society as a law-abiding, contributing citizen. Halfway house rules required residents to report to a case manager, but those who could find work were allowed to report for regular jobs—meaning that the residents could access computers and the Internet. While in the halfway house, Mr. McGowan used his access to the Internet to publish his article. When authorities learned that he had used the Internet to publish, prison officials terminated Mr. McGowan’s work privileges and then locked him back inside a secure prison, the Village Voice reported.

As I publish this article on the Internet, I’m also concluding the final months of my prison term. When I transferred from a secure federal prison to a San Francisco halfway house last August, however, I submitted a memo to the halfway house that apprised officials of my publishing career. I’ve been publishing routinely to explain why we as citizens of a democracy should work together to reform prisons in ways that would lead more offenders to emerge as law-abiding citizens. Officials may not have noticed my efforts to help more taxpayers understand America’s prison system. Perhaps the memorandum I submitted saved me from the type of treatment Mr. McGowan received as a consequence of his publications. Or maybe I was the tree that fell in the forest that no one heard.