Michael Santos was sent to prison in 1987 and watched the Internet grow from behind bars. It wasn't until August, 2012 that he got to experience it firsthand.

The Internet did not exist when I began serving my prison sentence, in 1987. I didn’t have direct access to the Internet as it dawned onto popular culture and became mainstream for many Americans, throughout the “You’ve got mail!” craze of the ’90s. Years would pass, until my release from prison in 2012 before I’d be able to experience the Internet first hand.

While I served my prison sentence, I frequently dreamed of using the Internet. From reading numerous technology magazines and financial newspapers, I perceived the Web as a powerful tool. From my perspective, it would become more influential to the advancement of society than television, radio, and the telephone combined. The interactivity and ability to engage people on an infinite scale quickly convinced me that this technology would transform the world and I wanted to be a part of that evolution. I read extensively about how citizens from everywhere were using the Internet to advance society, spreading knowledge and wisdom. I looked forward to becoming a part of the Internet generation.

As a prisoner, I could not access the Web directly. Staff members oversaw policies that placed enormous barriers between the people inside boundaries and society. In the prisons where I served my sentence, prisoners were even prohibited from accessing electronic typewriters. They had their reasons, I suppose, but blocking people inside from using technology did not go far in preparing them for success upon release.  By the late 1990s, I became so hungry to experience this new tool for myself, I created indirect ways to access the Internet. Connecting with society and making efforts to prepare for a law-abiding life upon release was a priority for me, and I had to figure out ways that I could overcome the obstacles imposed by prison rules that blocked prisoners from computers.

After reading numerous magazine articles about how people were launching websites, I wrote out a web design. It wasn’t much. I simply wanted a place to publish essays, articles, and profiles I wrote about other prisoners. I was still a citizen of our democracy, and as such, I felt that I had a duty to share my observations with taxpayers. I sent my web design to people from my support network and they coordinated the development of my first website. It was simple, but it served the purpose of allowing me to use it as a tool to document my journey through prison and to write about the experiences of others. Throughout the final decade of my imprisonment, I published thousands of articles on my website to help others understand prisons, the people they hold, and strategies for growing through confinement. 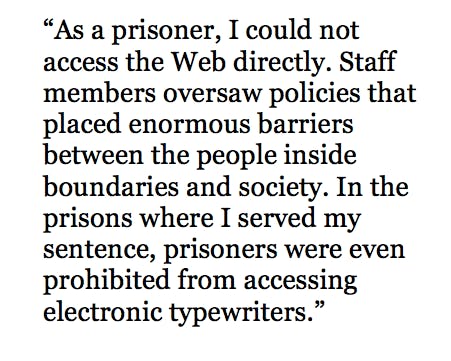 On August 13, of 2012, authorities allowed me to transition from federal prison to the community. I was not entirely free when I walked out of prison, as I was scheduled to serve six months in a San Francisco halfway house, to be followed by another six months on home confinement. During that final year of quasi-imprisonment that I am still serving in the community today, I work tirelessly to launch my career. And just as the Internet helped me through my final decade in prison, the Web continue to help change my life.

On the day that my wife, Carole, drove me away from prison, she handed me an Apple iPhone. After she showed me how to use it, I touched the Safari icon and began to access the Web for the first time. I used Google to search my name. It amazed me to see how the search engine indexed so much of what I had written about the prison experience over the years. I was determined to learn more about the Internet, to figure out ways that would help me connect with others. Using my iPhone that afternoon on August 13, 2012, I sent my first email message, writing an open letter that described my first hours in liberty for family. I watched my first YouTube videos, scanning various professional speakers to get an idea for their presentation styles. The Internet helped me learn in this way.

Within a few days, authorities allowed me to leave the halfway house and begin working. I had a job waiting for me and on my first day, I accessed an Apple laptop, the WorkBook Pro. I’d never used a laptop computer before, but I loved using the Mac to familiarize myself more with the Internet. I had a presence on Facebook and Twitter, but I didn’t know much about a best-practices way of using social media. I wrote book-length manuscripts in prison, but during those first days I spent researching the Web, I realized that I would need to develop skills to reach my audience in short messages, often in 140 characters or less. Attention spans in society, it seemed, had shortened.

I used Google to find journalists who might have an interest in my story of serving a quarter century in prison, and through email I reached out to them. I connected with journalists at the San Francisco Chronicle. That work eventually led to a front-page story that brought considerable attention to my work.

Because of my early research, I understood that the digital world would be much more powerful than print. As such, I began exploring more with social media. I wrote daily for a public Facebook page. I signed up with Quora and began writing lengthy articles in response to questions about the prison experience or overcoming adversity. I began developing my network on LinkedIn and through writing frequently, I built more followers on Twitter. I refined my own website so that people could find my work.

It’s been amazing how this work of self-publishing on the Internet has opened opportunities for me, opportunities which connect me to thousands of citizens. In January, for example, I received an invitation from Professor Alan Ross at UC Berkeley to address a crowd of 700+ people at Berkeley’s Wheeler Auditorium.  If I had not had access to the Internet, Professor Ross would not know my name. Through my Internet writings, I received other invitations to speak, including at the University of San Francisco Law School, and at Stanford.  The State University of San Francisco offered me an opportunity to lecture, but it also offered an opportunity for me to teach a course called “The Architecture of Imprisonment.” I’m eager to begin teaching on a university campus in the fall.

The Internet has changed the world, but it has also changed my life. I’m very grateful for this medium. The more I learn how to use it, the more I can contribute to helping others understand the message of overcoming adversity. I look forward to improving my knowledge of the Internet and to making more connections with followers of the Daily Dot.

Michael Santos is the author of numerous books that describe various aspects of the federal prison system. He most recent book, Earning Freedom: Conquering a 45-year Prison Term, shares events from the day of his arrest, on August 11, 1987 through the day of his release, on August 13, 2012. He speaks on subjects related to overcoming struggle and pursuing strategies for optimal personal performance. Michael makes himself available to answer any questions about his prison experience, his return to society after a quarter century in prison, or anything else. Follow him@MichaelGSantos.

Screen grab of The Shawshank Redemption (via sergeson/YouTube)