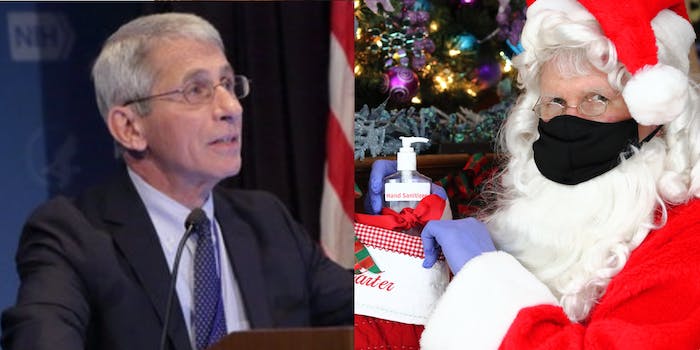 'Capture Santa and harvest his antibodies!'

Twitter users are determined to “drain” the blood of Santa Claus after Dr. Anthony Fauci alleged that the mythical holiday character was immune to the coronavirus.

In an interview with USA Today on Friday, Fauci, the nation’s top infectious disease expert, stated that Christmas would be unaffected by the pandemic given that Santa is unable to catch or spread COVID-19.

“Santa is exempt from this because Santa, of all the good qualities, has a lot of good innate immunity,” Fauci said.

Fauci’s remark was enough to convince countless users online that Santa’s blood was worthy of analysis in an effort to end the months-long pandemic.

“’That’s why we’re offering a $10 million bounty for his capture. I must harvest and study Santa’s blood,'” @acarboni joked.

Many were much less subtle when calling for Santa’s blood to be examined.

“Let’s fucking kidnap Santa and extract the cure from his veins,” @DeanDobbs suggested. “Drain him. Rinse him out like a flannel.”

Others celebrated the fact that Fauci seemingly confirmed Santa’s existence.

A lot of Twitter users viewed the jovial proclamation through an economic lens, noting that not even the virus could stop the financial powerhouse that is the holiday shopping season.

“Imagine being a working-class care-giver struggling through 2020 seeing this,” @DMcIntyre1998 said. “Govt twisting the knife using Santa as a pressure ploy to force a Christmas that isn’t feasible for the working class, knowing the children don’t understand the financial hurdles their carers face. Scum.”

Some celebrated Fauci for giving children hope during such a tumultuous time, while others felt the doctor’s comments were pointless.

“I am at the stage of the pandemic where I burst into tears reading this just because Fauci understands how at least little kids need to have hope,” @jodipicoult said.

In perhaps the most eye-opening tweet, however, one user noted that Santa actually could be the reason we’re dealing with a pandemic, to begin with.

“Wait a minute… that means he already had the viru … and he travelled all over the world last December… Folks, I think we’ve found Patient Zero,” @pixelatedboat said.

The story comes as the virus continues to infect record numbers of people in the U.S. More than 12.2 million cases have been recorded in the U.S., producing over 256,000 death in total so far.