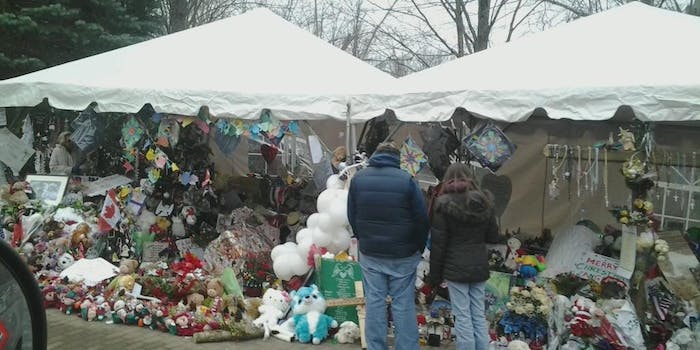 We can’t let this be the new normal.

In response to the Planned Parenthood shooting in Colorado Springs last week that claimed three lives, President Barack Obama said, “This is not normal. We can’t let it become normal.” Four short days later, at least 14 lives were violently, senselessly taken at a center for people with developmental disabilities in San Bernardino, California.

This proliferation of mass shootings is both a domestic terrorism and a public health issue—there is no doubt about it. The question is, what are we going to do about it?

These devastating events happen more often in our country than in any other developed country in the world. The numbers are staggering: Yesterday, the Washington Post reported that there have been 355 mass shootings in 2015 alone. That’s more than one mass shooting per day. With those statistics, the message is clear: We have already let mass shootings become the norm.

Fear, shock, anger, grief, and frustration are commonplace for so many Americans who, like myself, feel powerless against a violent epidemic that has claimed thousands and thousands of lives. This proliferation of mass shootings is both domestic terrorism and a public health issue. The question is, what are we going to do about it?

That is a question I’ve asked myself over and over after the hundreds of mass shootings that have occurred in the nearly three years since my 6-year-old brother, Noah, was gunned down in Sandy Hook, Connecticut, in his first-grade classroom.

Prior to losing Noah, gun violence wasn’t on my radar. I, like so many other Americans, convinced myself that it could never happen to my family, in my idyllic New England town where I felt safe for so many years. I remember watching coverage of the Aurora shooting on CNN just five months prior to losing my brother at Sandy Hook. I remember seeing the faces of the victims flash across the television screen, and I felt a pang of empathy for the families. As painful as it was then, I remember feeling far removed from the senseless violence and took comfort in the fact that it would never happen to me.

That all changed on the morning of Dec. 14, 2012. A college freshman at the time, I was in my dorm room when life as I knew it changed forever. I remember waking up to a series of phone calls from my mom. In a state of confusion and minor panic, I dialed her, thoughts racing through my head as I waited for her to answer. My first thought was that something had happened to an older relative. I couldn’t possibly have prepared myself for what I was about to face.

My two younger sisters were also at the school that day. All I could gather from that first shock-inducing phone call with my mom was that there had been a shooting. We didn’t have any information about the extent of the injuries, whether there were any fatalities or whether my siblings were affected.

As the day progressed, we learned more about what happened in the elementary school that day. The death toll continued to rise. As many as 26 fatalities were being reported, and though my sisters were reunited with my parents, Noah was nowhere to be found. All I could think about was that I might never see my brother again. And, all because one deeply disturbed individual had unrestricted access to firearms, I never will.

Almost immediately after the shooting, I knew I could no longer stay silent. I vowed to do whatever it took to ensure that my brother’s short life had meaning and purpose.

The fact is that more Americans than ever before are beginning to care about the issue. Too many of us are dying on street corners, in classrooms, in office buildings, in movie theaters and shopping malls for the issue to be ignored any longer.

Yet, since that horrific morning nearly three years ago, virtually nothing has been done at the federal level. As more and more shootings continue to occur all over the country—144 on school campuses since Sandy Hook—it’s easy to feel hopeless and discouraged. It’s easy to become desensitized, to want to throw our hands in the air and give up. However, the fact is that more Americans than ever before are beginning to care about the issue. Too many of us are dying on street corners, in classrooms, in office buildings, in movie theaters, and shopping malls for the issue to be ignored any longer.

With mass shootings an almost daily occurrence, “thoughts and prayers” are no longer enough for me. Once words of comfort for my family, they now sound like empty words to me, just a placeholder for the real issue: the need for action. If we are going to offer up thoughts and prayers to families of mass shooting victims, we also need to do something to prevent future tragedies. We need to actively change a culture that has accepted this type of violence as a way of life. We need common sense gun laws.

We don’t have to live this way. Too many innocent lives have been lost, and too many are on the line. Each and every one of us, Republican or Democrat, needs to work together to find a common-sense solution to America’s gun violence problem and help make this country’s street corners, classrooms, movie theaters, and shopping malls safer for our children and for all of us.

Whenever I feel discouraged, much like I do today, I think of Noah. I am reminded of how full of life he was, how funny and mischievous, and how he deserved to go to school and come home safely. I think about his twin sister, who was in a classroom across the hall during the shooting. I think about how she has to live the rest of her life without him.

They deserved better. We all do.

Danielle Vabner is originally from Newtown, Connecticut. She is a senior at the University of Texas at Austin and is expected to graduate in May 2016 with a degree in journalism. Since losing her brother at Sandy Hook School in 2012, Vabner has become a passionate advocate for gun violence prevention in the U.S. and plans to stay involved in activism after college.