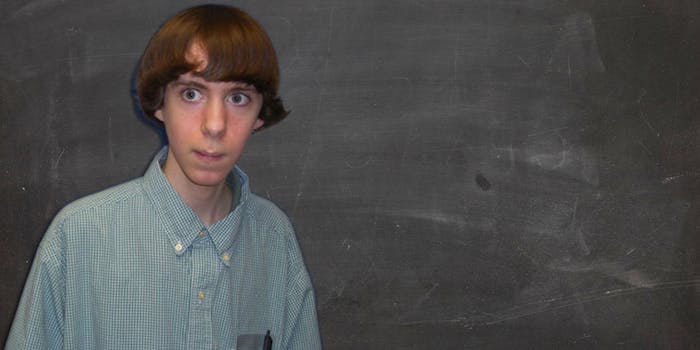 As Kaynbred, Lanza's favorite haunts were mostly gun forums, where he displayed an intense curiosity about gun laws, weapons, and ammunition.

Before Adam Lanza murdered 26 people at the Sandy Hook Elementary School in December, including 20 children, he spent hours online talking about guns, revealing a “fetish” for .32 ACP bullets, and editing Wikipedia articles about mass murderers.

The Hartford Courant, working off a tip from someone close to the investigation, has finally dug up Lanza’s past, which was a topic of intense speculation in the immediate aftermath of the shootings. For some reason, the paper chose not to reveal Lanza’s online identity. But it’s easy enough to find, since the Courant quotes him verbatim and reveals the names of websites he frequented.

As Kaynbred, Lanza’s favorite haunts were mostly gun forums like the High Road, where he displayed an intense curiosity about gun laws and a deep knowledge of weapons and ammunition.

In one thread on the website thehighroad.org in October 2009 at 1 a.m., the poster believed to be Lanza asks whether a ban on a certain semiautomatic pistol might extend to other weapons.

Another poster suggests that he ask the Connecticut State Police.

“I always prefer asking through proxy when I can avoid speaking to someone directly. I was just wondering if anyone knew because I have a fetish for .32 ACP,” the poster suspected to be Lanza responds, referring to ammunition.

This is the thread in question.

In another thread to the same post, Lanza asked for help upgrading an M2 carbine rifle so that it could fire fully automatic.

In Connecticut, fully automatic firearms are legal to own but selective fire is prohibited. I vaguely recall reading ~1 year ago about a company which alters them to fire exclusively automatically (or something in that vein), but I do not know how that process works. For example, with whom would I correspond to modify a Title II M2 Carbine that is currently in another state to fire fully automatically before it is sent to Connecticut?

On Wikipedia, that same fetish with firearms merged with a ghoulish and portentous obsession with editing and correcting articles on mass murderers. For instance, on Feb. 10, 2010, Lanza fact-checked the article on Richard Farley, a Texas man who shot and killed seven people at his former workplace in 1988. His edits included a huge section on the types of weapons Fairley brought with him to the murder scene.

At other times, he edited articles on the Sello Mall shooting, Luby’s massacre, the Dawson College shooting, and the Collier Township shooting.

On the entry for Kip Kinkel, who murdered four and injured 25 others in a mass shooting at Springfield, Ore., in 1998, Lanza again showed an almost compulsive obsession with firearms.

“Specifying the weapons,” Lanza wrote as a note to his edits.

Lanza isn’t the first mass murderer with a Wikipedia pastime. Earlier this year, Norwegian media revealed the Wikipedia identity of Anders Bering Breivik, who killed 77 on the island of Utoya in July 2011. His edits have yet to be removed.