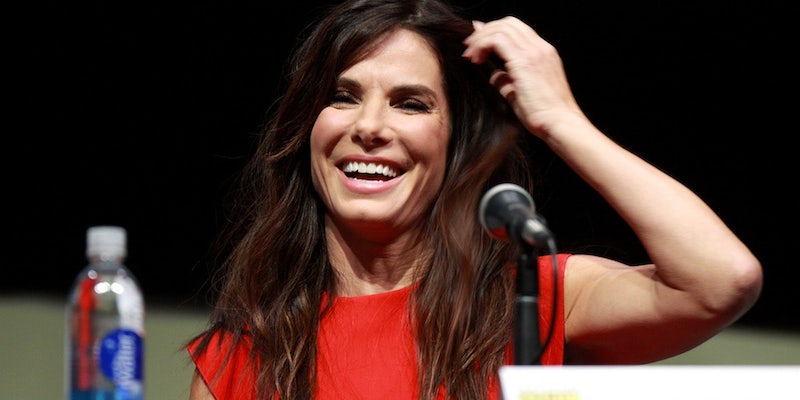 People’s Most Beautiful Woman is bad for ladies everywhere

People magazine announced yesterday that Sandra Bullock has been chosen as the World’s Most Beautiful Woman for 2015, and the response on Twitter was basically duh.

Congrats, Sandra Bullock! People Magazine’s “Most Beautiful Woman” of 2015! She looks incredible at 50. I am proud to call her my friend.

Proof that beauty has no age. @People's 'Most Beautiful' #SandraBullock has raised the bar. #BeautyIsNotaNumber https://t.co/qXwuin3Ipu

WHAT A GREAT TIME TO BE ALIVE

I have made a short pros and cons list to explain how I feel about this news.

I’m first going to address those of you who are going to argue that this isn’t about misogyny because People also does a Sexiest Man of the Year. First of all, we all know that Sexiest Man of the Year is a joke title that has been passed around since 1997 between George Clooney, Brad Pitt and that guy from Maroon 5 who likes to take his shirt off. Secondly, no one is saying that our society doesn’t have any appearance-based standards for men, but there’s almost no comparison between the two.

So to those of you who are tempted to pop up in the comments with your “but what about Adam Levine,” I will say good day to you, sir. Please take whatever you are selling elsewhere.

Sandra Bullock is a smart, wickedly funny, Oscar-winning actress. She has literally everything going for her. So why, out of all of the rad things about her that we could praise her for, are we choosing to focus on her looks? Because the truth is that in spite of three plus waves of feminism, we still assign a huge amount of importance to women’s physical appearance. What’s even worse is that we now often do so under the guise of empowering women, as if it’s impossible for girls to feel good about themselves unless they feel pretty.

In spite of three plus waves of feminism, we still assign a huge amount of importance to women’s physical appearance.

There’s a lot of money to be made off of telling women that they’re beautiful—just look at the success of Dove‘s Real Beauty campaign, several iterations of which have gone viral. There’s nothing we love more than an ugly duckling story, where at the end the protagonist is revealed to have been a swan all along. We’re suckers for that moment of reveal, when the woman bursts into tears because for the first time in her life she understands that she’s pretty. We’re rooting for her; we want her to feel beautiful. We want all girls to feel beautiful. They deserve it.

What I want to deconstruct here is why we continue to insist that prettiness is somehow necessary for female empowerment. The standard line of thinking goes that beauty is a good thing, and being considered beautiful makes people feel good about themselves. To be beautiful is to wield power, and maybe if we can revise our beauty standards, then we can redistribute some of that power among people who have been traditionally disenfranchised.

But while strides have made in moving away from the narrative that tells us that thin, white, able-bodied women are the zenith of attractiveness, few people have actually tried to dismiss the idea of beauty altogether. And yet it’s hard not to feel that no matter how we reframe it, prioritizing beauty is still a trap. Even as we try to extricate ourselves from a toxic culture that tells us that all women need to look a certain way, we continue to insist that all women need to feel a certain way about their appearance.

While the latter is certainly better than the former, it still reinforces the idea that how a woman looks—even if it’s just how she looks to herself—is important. That’s messed up.

I’ve always had a tricky relationship with beauty. As a teenager, I was teased a lot for my pimply face, greasy hair, and weird clothes. I can remember a time when I honestly would have traded any of my many sterling qualities—my intelligence, my sense of humor, and my ability to make a wicked breakfast sandwich—for a pretty face. Ugliness seemed unbearable, and I remember thinking that it was unfair that this thing that made me so profoundly unhappy seemed so permanent.

We want all girls to feel beautiful. They deserve it.

Even now, as an adult who has made peace with and even learned to appreciate her looks, I cringe at appearance-based compliments. Not because I don’t want them, but because I still want them so badly that I’m afraid to believe they’re true.

Beauty is an incredibly loaded concept, and I’m not sure we’ll ever be able to get away from all the baggage it carries. Maybe part of the problem is that it feels like a destination we can never arrive at, in the sense that its qualities are so intangible and transient that we will always feel as if we’re reaching without ever being able to get a firm on them. Our culture ensures that none of us ever feel beautiful all of the time; there’s always something that can be tweaked, changed or improved.

Ultimately we need to ask ourselves if that work is worth it.