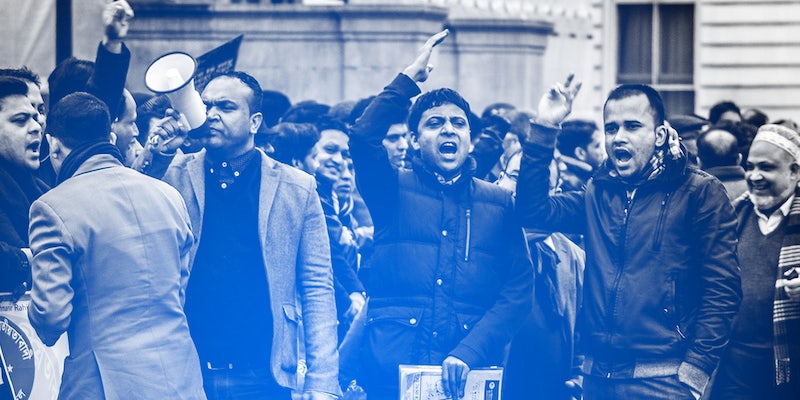 Note: This article discusses themes of suicide and police abuse.

Another week, another unarmed black person who, in death, is memorialized by a hashtag. Her name? Sandra Bland.

No one seems to believe what they’ve initially learned about her July 13 death while in police custody. Bland was in the process of relocation from Chicago area for a job she was set to start this week. According to reports, family and friends who had been in communication with Bland said she was upbeat and excited to embark on a new adventure. She showed no signs of being distressed or depressed in any way.

Yet Bland has become another hashtag—in a trend of black people whose lives ended tragically at the hands of police; authorities claim she committed suicide while in jail. And it all stems from a police stop over an alleged traffic violation. It was just a traffic violation.

Based on Facebook videos posted by Bland, some initial reports suggest she may have suffered from depression or post-traumatic stress disorder. While Bland’s mental health status may have played a factor, that alone—especially if it is a self-diagnosis and not one made by a mental health professional—isn’t enough to make the logical jump that she indeed took her own life.

However, if the video accurately captures the nature of Bland’s arrest, how she was treated by police—and how the public has reacted—indeed speaks to a troubling pattern. When black women experience police brutality, it’s often harder to keep their cases in the public conversation.

In many ways, what aggravates the sadness and anxiety about the nature of Bland’s case is that, days later, all the public knows is what law enforcement officials in Waller County, Texas, have released to the public. As KPRC in Houston reports, authorities say Bland died from asphyxiation, having hung herself from an overhead partition in jail cell with a plastic garbage bag. Although officers claimed Bland assaulted them, resulting in her arrest, a bystander’s video recording apparently runs contrary to the police account.

The video doesn’t show Bland becoming “combative” with officers—as law enforcement has alleged—but does reveal that she expressed outrage and anguish after her head was slammed into the ground, rendering her unable to hear. Bland further showed gratitude to the bystander for recording the incident, perhaps the last person outside of a county jail to ever see her alive.

Now that the concerned citizens of social media are asking #WhatHappenedToSandraBland, because they’re skeptical of the official report. The widespread doubt is more than understandable given the past year of protests associated with racialized police violence.

Very very very disturbing story… my heart goes out to her family. #WhatHappenedToSandraBland

How do you spend three days in jail for a traffic violation, then turn up dead? it doesn't add up #SandraBland #WhatHappenedToSandraBland

Dear white people, any of you EVER been pulled over for a lane change? Did you end up dead? #SandraBland #WhatHappenedToSandraBland

As Jamilah Lemieux notes at Ebony:

Mental illness and depression are complicated beasts, but so is the American system of policing. When it comes to the death of a black person in police custody or during an encounter with officers, what reason do we have to “official” accounts of what happened, when videos and witnesses have made liars of officers over, and over, and over again? When people of other races are routinely stopped, questioned, arrested (or NOT stopped, NOT questioned, NOT arrested) and somehow manage to live to see another day? We need to know what happened to Sandra Bland but what clarity can we expect to get from the same people who arrested and jailed her?

Even further, Lemieux echoes the call from a campaign to ensure that black women who endure racialized and gendered forms of police violence are given the same prioritization and attention as when black men are victimized: #SayHerName.

Also, we've watched the #SandySpeaks videos, there is no one who can convince me this woman wouldn't want us to #SayHerName, period.

In the case of Sandra Bland, social media is taking note. A Change.org petition calling for the U.S. Department of Justice to “Take Over The Investigation Into The Death of Sandra Bland From The Waller County, Texas Police Department” has amassed roughly 70,000 supporters since its July 16 launch. On the following day, July 17, news reports confirmed that the FBI would join the investigation, signaling that federal agencies share the same skepticism felt by the black community.

Other law enforcement officials, including Waller County’s own district attorney Elton Mathis, are wondering about the precarious circumstances around Bland’s death. “I will admit it is strange someone who had everything going for her would have taken her own life,” Mathis said, according to KPRC. “That’s why it’s very important a thorough investigation is done and that we get a good picture of what Ms. Bland was going through the last four or five days of her life.”

Even as authorities dig deeper, a public call for accountability is an important tool in ensuring that victims of racialized police violence don’t have their stories swept under the rug. As was demonstrated following the death of Trayvon Martin, social media—combined with responsible reporting—helped sustain national attention on the case, the trial, and the unconscious biases that give way to young black people being victimized by police officers—or vigilantes like George Zimmerman.

Unlike other recent incidents—such as the ones that claimed the lives Tamir Rice, Eric Garner, and Walter Scott—Martin’s final moments weren’t recorded on camera. The circumstances alone were enough to cause alarm. But as the conversation has intensified about anti-black police violence, more bystanders opt to record incidents, hoping it will ensure accountability beyond police officers self-reporting the nature of an arrest, beating, or shooting.

So far, however, relatively few videos have been captured of black women subject to the use of police force. Notably, video of the the McKinney, Texas pool incident shows the now-resigned officer Eric Casebolt throwing a 15-year-old black female teenager to the ground in a brutal takedown, grabbing her by the neck, throwing her to the ground, and pinning her with his knee to her back.

And last December in Baltimore, as New York magazine reported, 36-year-old Kianga Mwamba was tased by police because she used her cell phone to film the arrest of a man across the street. She unwittingly recorded her own incident of police abuse, with one officer telling her at the video’s end, “You’re a dumb bitch, you know that?”

Although black men are indeed more likely to be victimized by police, not addressing the experiences of black women serves to erase the violence that indeed occurs at various other intersections of blackness, as the African American Policy Forum’s #SayHerName report underscored.“Although black women are routinely killed, raped, and beaten by the police, their experiences are rarely foregrounded in popular understandings of police brutality,” said Kimberlé Crenshaw, director of Columbia Law School’s Center for Intersectionality and Social Policy Studies and co-author of the report. “Yet, inclusion of black women’s experiences in social movements, media narratives, and policy demands around policing and police brutality is critical to effectively combatting racialized state violence for black communities and other communities of color.”

Until we truly know what happened to Sandra Bland, it’s incumbent to keep pushing for true accountability, moving beyond initial reports and the fog of speculation toward a clear answer and resolution. If we can signal boost the stories of black men when they suffer or die at the hands of police, we can certainly do the same when it’s time to support black women and their families.