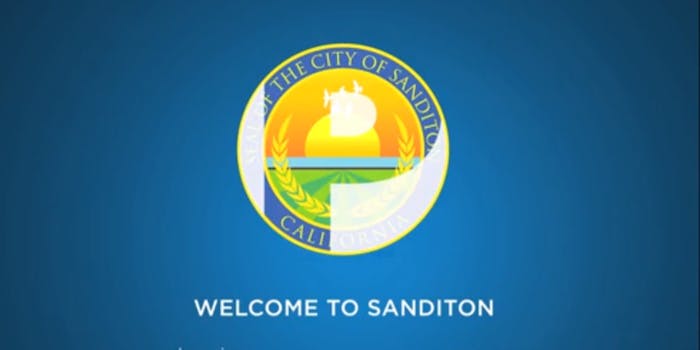 If Austen were online in 2013, she'd be picking up her camera and joining them.

We can’t get enough of YouTube charmer Sanditon here at the Daily Dot. Not only because it’s an Internet culture reporter’s wet dream, but because it just keeps getting cuter.

Oh, and because this satirical webseries about a fake town has wasted no time in using Jane Austen’s original unfinished novel as a launchpad to do whatever the hell it wants, including roping all of its hundreds of eager roleplayers into the storyline in its latest episode.

When Sanditon premiered, we wondered how the creators would approach the original storyline, which sadly ended before it really got underway. Austen, writing in the last months of her life, got only 12 chapters in before she had to stop due to pain. Other writers, attempting to finish what she started, have taken the novel in the direction of romance.

For the creators of The Lizzie Bennet Diaries, fresh off millions of views and a wildly successful Kickstarter, romance has worked well. But Sanditon, a kind of summer aperitif before their next big project (as yet unannounced), so far seems to be less about spinning a tale of love and more about celebrating the fans of LBD and their endless capacity for elaborating and expanding the story worlds they’re in love with.

The brilliant thing about using Sanditon as a kind of fandom playground is that expansion is built into the narrative itself. Austen wrote about a coastal English town trying to build itself as a tourist destination and attract new residents. In just two weeks, fans have expanded the fictional town of Sanditon, Calif., by orders of magnitude, creating hundreds of Twitter and Tumblr accounts for their fictional shops, community groups, residents, and town infrastructure.

And now, with the latest episode, in which roleplayers take to their webcams to talk about their town, many of them have actually become a part of the series itself.

Sanditon roleplayers are not only a diverse bunch, but a clever bunch. “It almost seems like the entire town of sanditon got twitter within two days,” says one roleplayer, and just like that, Sanditon has become a meta-parody inside a meta-parody of the original parody.

And if you ever doubted that Sanditon was ultimately about fandom, references to LBD fandom abound throughout the show’s interplay with fans. (The Sanditon softball team is called the Sanditon Seahorses, a reference to the fan name for Lizzie/Darcy shippers.) And the fan-created Sanditon Tea—perhaps modeling itself after Adagio’s popular real-life fandom tea service—is making us wish that we could pop in for a Cuppabatch.

@theedwarddenham But the young woman from @sanditontea said I word I didn’t understand. What is “fandom”? Can you draft a memo about it?

As fan-friendly as the episodes have been so far, however, they’ve polarized the LBD’s fanbase, many of whom are angry because as non-active participants in the roleplay, they don’t have much actual story to get behind and are feeling left out. Tumblr’s Sanditon tag is a wash of mixed reactions to the latest ep, with many fans claiming that they feel the series so far has devolved into a mere transmedia experiment.

Still, nearly 30 Sanditon “citizens” participated in Thursday’s video. On the fictional website of Pemberley Digital, the business whose fake digital technology bridges the worlds of Lizzie Bennet and Sanditon, there are nearly 30 pages of “personas”—people who are uploading videos of themselves interacting with the fictional world of Sanditon and each other.

We can’t help but think that if Austen were online in 2013, she’d be picking up her camera and joining them.