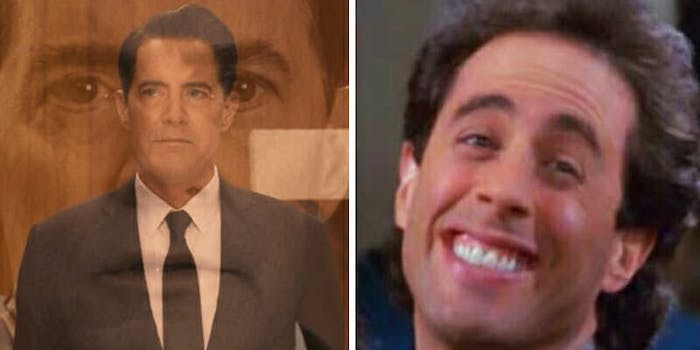 This ‘same energy’ meme is the new ‘totally looks like’

“Totally looks like,” also known as “separated at birth” memes have been around since the dawn on the internet, but noticeably gained popularity in the mid-aughts. For example, you’re likely familiar with the comparisons of then-Twilight star Taylor Lautner to an alpaca or any number of real-life Peter Griffins from Family Guy.

In fact, there are entire websites, Tumblrs, and subreddits devoted to the theme. Recently it’s been repackaged as “same energy.” Because these days, everything apparently seems to require some kind of energy, “big dick” or otherwise.

It appears that the meme may have started on Korean Twitter (or at the very least, picked up steam there) as a proliferation of examples related to BTS, the massively popular K-pop boy band.

But the meme isn’t exclusively for things that look exactly alike, as you can see from this example which compares the scene in Twin Peaks: The Return when (spoiler alert!) Special Agent Dale Cooper finally snaps out of it, to a still of Jerry’s self-aware grinning in Seinfeld.

Or this example that takes a scene from the 2000 teen horror flick Gingersnaps and puts it alongside the big reveal scene in the original 1996 Scream:

And then this example mashes up model Cara Delevingne’s controversial yet eye-catching tuxedo outfit at the recent royal wedding of Princess Eugenie of York and Jack Brooksbank with an image of “Pearl” from Steven Universe.

And then there’s this one that puts Tom Hiddleston alongside a cat being held at knife-point, for some reason:

These have the same energy pic.twitter.com/cMj6Dtb18E

And here are just a handful of other random examples, many involving anime:

“Same energy,” “totally looks like” … whatever you want to call it, as long as it involves Justin Timberlake circa late-’90s and a brick of Ramen noodles, we’re good. Old memes never die, they just find new generations of internet-savvy goofballs.