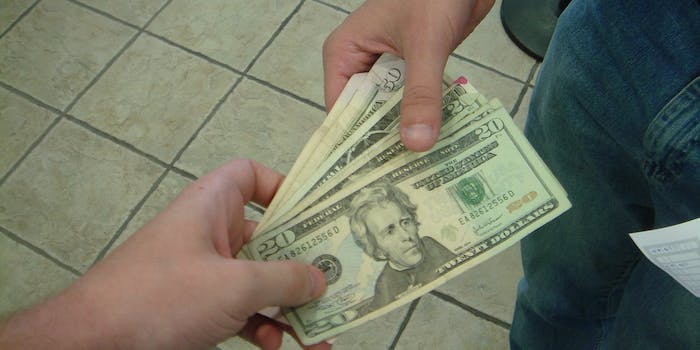 Celebrating on Twitter while U.S. students owe more than $1 trillion may not have been the best idea.

For Americans looking toward a degree at a prestigious university, there are few options to pay your way through school unless you’re a) super rich or b) super smart.

Financial services company Sallie Mae is a key port of call for those looking to borrow money for school. The firm celebrated its 40th anniversary Monday with a series of tweets touting how much it’s grown in the last four decades.

Needless to say, many Twitter denizens were displeased at Sallie Mae patting itself on the back. 43 percent of Americans under the age of 25 had student debt in 2012, with an average burden of $20,326, according to the Federal Reserve Bank of New York. All told, Americans owe more than $1 trillion—with a T—in student debt.

Many Twitter users claimed to be mired in debt, while others were just plain mad at the firm that enabled them to pay through the teeth to get a college degree and a shot at a comfortable lifestyle that might not have worked out.

At one point Monday, Sallie Mae was trending worldwide. Here are some of the tweets that ensured the company was in the spotlight on Twitter:

Sallie Mae sounds like someone who would loan you a cherry pie and let you pay her back by babysitting her grandkids.

Everyone hates you RT @salliemaeWhen Sallie Mae opened 1973, we had 7 employees. Today we employ 7,000 people nationwide.

If i ever met Sallie Mae in person…stream1.gifsoup.com/view/81598/spe…

Sallie Mae is proof that the devil does his work on earth.

As soon as folks graduate and walk across that stage, Sallie Mae be waiting like this… twitpic.com/cqbejy

High APR, no post-grad-refinancing, racketeering with universities. Sallie Mae is the embodiment of why the student loan system is corrupt.

Let’s take a moment to pause and reflect on the perhaps more salient issue.

Why are you mad at sallie Mae ? Be mad at the college who created the system of extreme tuition and suckered you into that major with no job

Sallie Mae makes more money selling student spending info from Upromise to other companies than they do actually loaning money.

It’s all about the system, man.

Word of advice to all those pissed at Sallie Mae and ridiculously high tuition: Move to a country where higher education is cheap and/or free. Like Canada, or Scotland.

Not everyone thinks the worst of Sallie Mae, however:

My first trip to the strip club was funded by Sallie Mae.