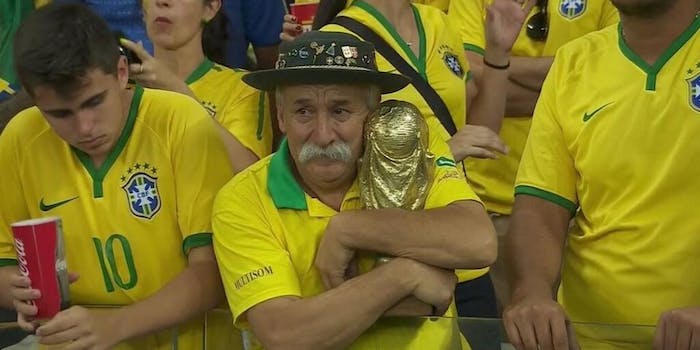 Sad Brazil fan gives up his trophy to young Germans

This is what World Cup sportsmanship is all about.

An older soccer fan, steadily gaining notoriety as the “world’s saddest fan” following Brazil’s loss to Germany in the World Cup, has had his other side exposed: He’s a gentleman who gave his prized trophy to young German fans.

“This sad Brazilian fan was shown crying. But no one’s published this beautiful picture of him,” redditor gabyxo wrote in a July 9 post on the ever-active subreddit r/WorldCup.

He reportedly said to her, “Take it to the final! It’s not easy, but you deserve it. Congratulations.”

Earlier, the cameras caught him clutching a trophy as the realization of his Brazil’s loss sunk in.

Most heartbreaking picture of the World Cup pic.twitter.com/Dz7mZHy6U8

The man is reportedly Clovis Acosta Fernandes, also known as “Gaucho da Copa.” “The guy is somewhat of a legend in Brazil,” gabyxo writes.

A popular staple at Brazilian matches, including at least two past World Cup appearances, Fernandes carried a replica of the 1950 World Cup trophy and took it to each and every game.

Gabyxo took the liberty of coupling the picture with another, less-circulated shot of him gleefully, not sadly, handing the trophy off to one of Germany’s jubilant spectators. 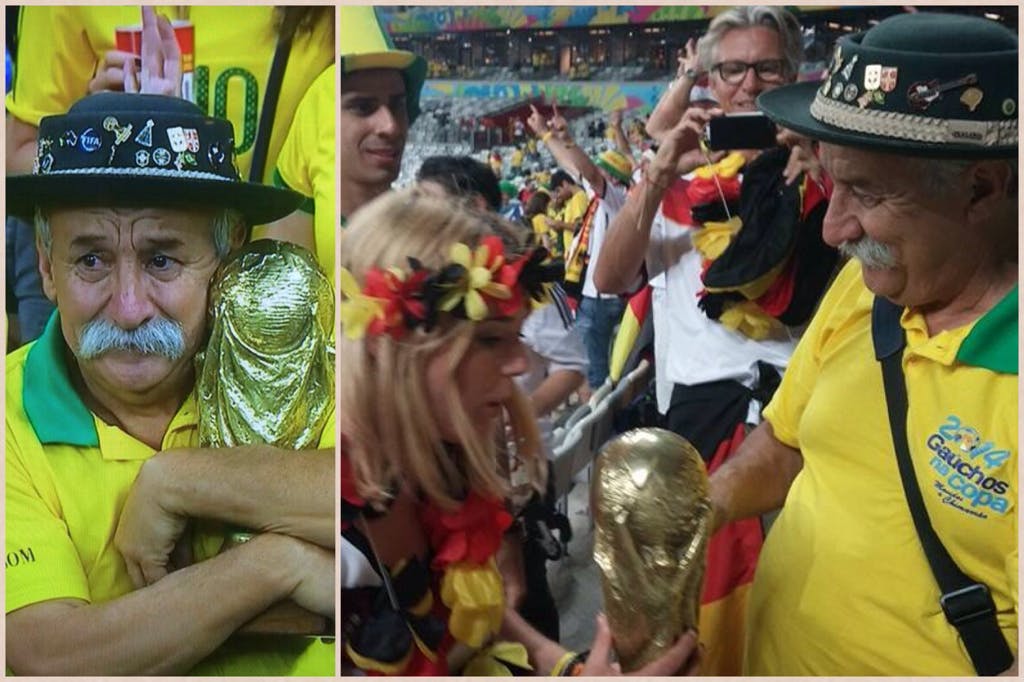 “He’s been to those games with the replica he just gave away,” redditor CountVonTroll said. “This hit me like a hammer when I read about it. It entirely changes the context of the iconic photo/video/GIF of him—he’s not just mourning the loss, he’s saying goodbye to his trophy that has accompanied him to so many places and that he is about to give away moments later.

“I hope she hears about the replica’s history, takes it to the final, and then gives it to Brazil’s football association so they can exhibit it with a picture of him next to it. Fans are an important part of football and he seems like a great representative of Brazilian fans, and that should be recognized.”

“This is an amazing photo, it shows the sportsmanship of the spectators, respecting those who cheer against your own,” redditor muchograndes wrote.

It’s no surprise that the real people depicted in popular memes are quite different from their online image. Everyone from Overly Attached Girlfriend to Scumbag Steve has proved as much. So it’s really no surprise to see that the World’s Saddest Fan is, indeed, not a sore loser in the slightest.

Plus, governments all over the world could learn a thing or two from his own personal example of diplomatic relations.