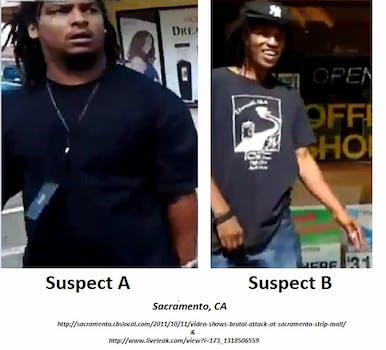 A brutal video of an attack on a mentally handicapped woman spurs some to action—and others to insults.

An amateur video shows a young man sucker-punching an older woman while the cameraman cackles. The woman approaches a second young man with a similar hairstyle and shirt, who punches her in the face, this time knocking her to the ground.

That video made it to the homepage of Reddit on Thursday. And the rough democracy of the social news site, applied to this explosive material, quickly ignited the best and worst of the users on the site.

Some redditors took it upon themselves to determine the identity of the assailant.

“I declare a nationwide search,” wrote My_College, in one of the most upvoted comments.

He presented a roundup of resources, including a collection of screengrabs that clearly showed both assailants’ faces. StainlessSteve recognized the exact storefront of the assault, in his town of Sacramento, California. DominicDom named high schools in the area, and encouraged other residents to check yearbooks for the names of the assailants. (One user apparently linked to what was purportedly one of the perpetrator’s Facebook accounts, but his comment has been deleted, as Reddit’s rules prohibit posting others’ personal information.)

Later Thursday afternoon, a local news report stated the suspect who first punched the woman had been arrested, as Nautis said. The report cites “tips from the public” to the police as helpful to the arrest, though it doesn’t specify if Reddit’s information was used.

On the other hand, many took to Reddit simply to express anger and took note of the demographics of the people in the video. Both assailants are young black men. The woman is white, and reportedly mentally handicapped.

“Yep this video made me more racist. Sorry but it’s true,” wrote Ponythrow.

“Monkey see, Monkey Do,” zmoney1213 wrote, expressing an inflammatory but not unique sentiment in the thread.

Across more than 5,000 total comments, a racial epithet for African American appeared 350 times.

That prompted a discussion over whether such language is acceptable to use if it clearly describes criminals, rather than African-Americans as a whole.

“Chris Rock really did say it best,” said cyberslick188, referencing a bit by the comedian where he makes such a distinction.

“Chris Rock would really appreciate you not bringing him into this anymore. He gave that bit up cause of people like you,” responded Trenzor, with a link to Rock saying he’d never do the joke again because it had been coopted by racists.

“Blacks : making it hard for the world to not hate them,” wrote itook_theredpill.

Not everyone shared this view.

recycle_throwaways said, in response to the use of racial slurs, “These kids deserve the book thrown at them. But nobody deserves racism.”

Conceptualconcepts was among the black redditors who found the whole thread frustrating: “I’m Black. Great …. sigh.”