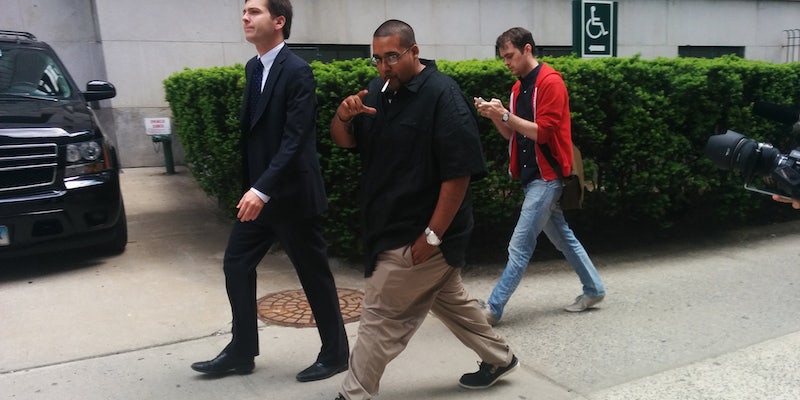 Anonymous hacker Hector Monsegur, best known as Sabu, was released Tuesday on time served for his role in a slew of high-profile cyberattacks on corporate and civilian targets. He also received one year probation.

Monsegur, 30, received a significantly lighter sentence thanks to the government’s request for leniency for his cooperation with law enforcement. Federal prosecutors originally asked that he serve an additional seven months behind bars.

The FBI called Monsegur “extremely helpful,” and claims that he helped thwart more than 300 separate cyberattacks in the three years he served as an informant.

Presiding U.S. District Judge Loretta Preska repeatedly referred to Monsegur’s help with law enforcement as “extraordinary,” adding, “you don’t often hear of this,” in reference to the extent of his informant duties.

Defending Monsegur’s actions, his attorney said Sabu saw the Internet as “a tool used to increase accountability and freedom,” and called many of his hacks “light-hearted.”

Monsegur, often called the “Ringleader of Anonymous,” pled guilty August 15, 2011, for his roles in a long string of Anonymous-related attacks. His sentence was significantly mitigated by his decision to turn informant for the FBI after his arrest, which led to a number of his former colleagues landing in prison, and earned him the scorn of fellow hackers.

Sabu’s pre-informant charges begin with Dec. 2010’s “OpPayback” attacks on PayPal, Visa, and Mastercard. The hacking campaign came as retaliation for those companies’ refusal to process payments to WikiLeaks. They end with a series of ongoing attacks, including on Sony Music and the technology security firm HPGary in June 2011. In between, he had roles in factions of Anonymous—often identifying security flaws for others to exploit—that involved attacks on the governments of Tunisia, Algeria, Yemen, and Zimbabwe, and a host of other companies like Fox and PBS.

Sabu’s attorneys speaking now. He wants to get on w/ his life. Concerned about safety. pic.twitter.com/IQlY1AvNbN

Monsegur also pled guilty to using stolen credit cards to cover his own bills, and to hacking an automotive company to send him $3,450 in stolen car parts. A foster parent to two girls, Monsegur originally faced up to 122 ½ years in prison. His sentencing hearing was first scheduled for Feb. 12, 2012, but was repeatedly delayed.

After agreeing to help the FBI “immediately” after they busted him in his home on June 7, 2011, according to court documents, he proved extremely helpful to their investigations.

Under “the direction of law enforcement, Monsegur asked seemingly innocuous questions designed to elicit information from his co-conspirators that, when coupled with other information obtained during the investigation, could be used to pinpoint their exact locations and identities,” the sentencing attorney James J. Pastore, Jr. said. He added that Monsegur’s subsequently helped identify vulnerabilities in a wide range of computer networks, including utility companies and NASA, preventing “millions of dollars” in losses.