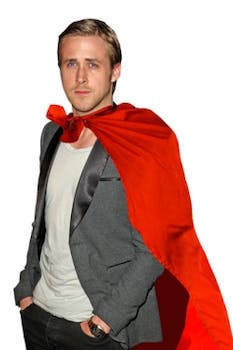 Ryan Gosling saves journalist from being hit by taxi

Actor Ryan Gosling has swept another lady off her feet.

This time though, he was just being a good citizen.

Journalist Laurie Penny was crossing the street in New York on Tuesday when Gosling stopped her from being clipped by a car.

“I literally, LITERALLY just got saved from a car by Ryan Gosling. That actually just happened,” tweeted Penny. “I was crossing 6th avenue in a new pink wig. Not looking the right way because I am from London. Ryan Gosling grabbed me away from a taxi.”

Gosling, who is famous for films like Drive and his “Hey girl” memes has since been crowned hero for the day on Tumblr and Twitter.

“Is there anything Ryan Gosling can’t do? Ryan Gosling is our hero… again,” tweeted April Henry (@aprilhenrybooks).

Since being saved by the 31-year-old actor, Penny has been bombarded with interview requests she has no time for.

“My phone and email have been going crazy with media requests all night and all morning and it’s getting silly now,” Penny tweeted. “Seriously, media, PLEASE stop contacting me with interview reqs about Ryan Gosling now. I am busy writing a book and don’t have time today.”

Can a new “Hey girl” Tumblr blog be far behind?