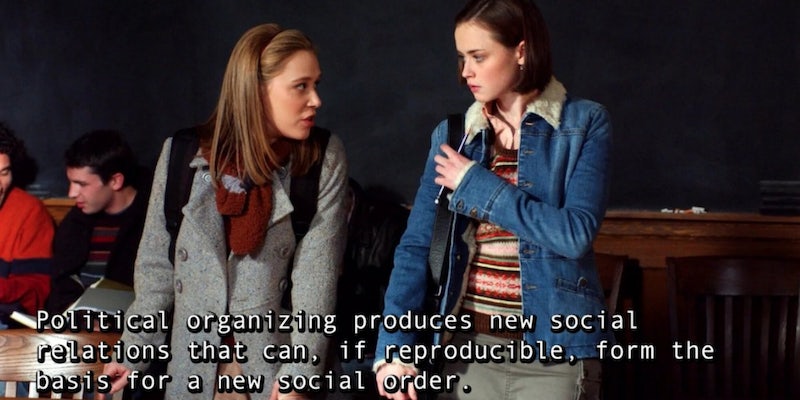 It highlights the work of Ruth Wilson Gilmore—and demands police reform in Connecticut.

The idea of abolishing or defunding police is not new. But in the wake of mass protests and the deaths of more Black men and women by police, those conversations are being reassessed and analyzed, even as the what-aboutism persists.

The Twitter account Ruth Wilson Gilmore Girls was created earlier this month to educate about police abolition and prison reform, using stills from Gilmore Girls. It takes its name from Ruth Wilson Gilmore, an advocate for prison abolition, scholar, and author. In 1997, she and Angela Davis founded Critical Resistance, a platform that “seeks to build an international movement to end the Prison Industrial Complex by challenging the belief that caging and controlling people makes us safe.”

The account contrasts quotes from Gilmore and her 2007 book Golden Gulag: Prisons, Surplus, Crisis, and Opposition in Globalizing California with scenes from the majority-white fictional setting of Stars Hollow, Connecticut, where police are “guest” characters. According to the Gilmore Girls wiki, the character Officer Weston appears in season 6 to break up a gathering of traveling musicians crowding the town square, but can’t arrest them all because he’s on a bike and Stars Hollow has one jail cell. In season 5, Rory and Logan steal a yacht and get arrested, but Logan’s lawyer gets him off the hook.

But the matter is also personal. The account is trying to raise awareness for those killed by police in Connecticut, “where we have been in a state of emergency for a long time. over 30 police killings in 3 years.” A GoFundMe for the organization Justice for Jayson details the 2017 death of 15-year-old Jayson Negron and 2018 death of 18-year-old Corbin Cooper, both in Bridgeport.

Justice for Jayson organized protests outside the Bridgeport Police Department this week, demanding cuts to the police budget, removal of police from schools, and the firing of James Boulay, the officer who shot Negron and was later cleared of wrongdoing. Since Sunday night, protesters have camped out in front of the police department, and plan to remain there until their demands are addressed by Bridgeport City Council.

We’ve reached out for comment. For a deeper analysis of the abolition movement and its historical context, listen to Gilmore’s recent interview with Rutgers assistant professor Chenjerai Kumanyika.