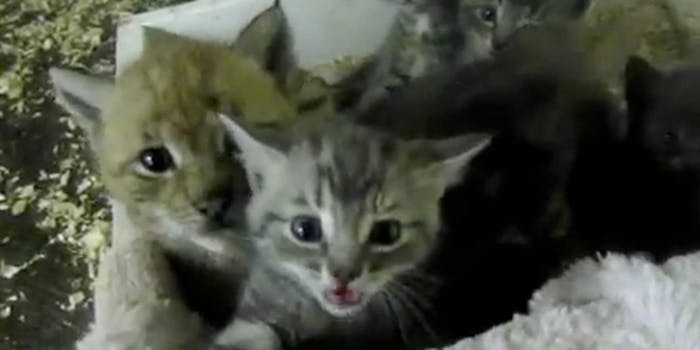 Will Anonymous have the clout and determination to shut the place down for good?

On Sunday, a disturbing 10-minute video appeared on YouTube. The short film, shot over two days of Canada Day Weekend, takes us on a tour through Guzoo Animal Farm in Three Hills, Alberta. We see parrot and baboon cages that have never been cleaned, the maggot-infested food fed to kittens, and a mass grave of animals that have not survived the farm’s unspeakable conditions.

The Alberta SPCA’s phone must be ringing off the hook, since a Facebook page dedicated to ensuring Guzoo’s closure already has several thousand fans, a separate petition on the matter has emerged, and on YouTube and Twitter, anyone outraged by what they’ve seen has been urged to contact the proper animal rights and safety authorities.

Popular Anonymous news source @YourAnonNews is championing the cause. So is Rustle League, a team of online trolls that once targeted @YourAnonNews.

Bird taken out of a ‘paradise’ and stuffed into filthy cage at #GuZoo http://t.co/8HJvVFbkFr #OpGuZoo

I want to take the time to thank everyone whos worked on #OpGuZoo everyone has worked their asses off for the past 48 hrs go humanity!

In fact, according to the nonprofit Big Cat Rescue, the SPCA initiated an investigation on Monday due to the vast number of complaints in the wake of the YouTube exposé and attendant social media blitz. It’s unclear whether the group will take any action, however.

The same cannot be said of others angered by Guzoo’s attitude toward its animals’ well-being. The shocking video and photos circulated also drew the ire of hacktivist collective Anonymous, which quickly targeted the facility and its owner/operator, Lynn Gustafson, for retribution:

We Are Anonymous. This is Operation Guzoo.

A horrific case of animal abuse in Alberta, Canada has recently caught the attention of Anonymous. Following some recently leaked images of the Guzoo Animal Farm, the public has learned that the animals living there have been subjected to an environment of gross neglect, which we defined as barbaric.

Our intention is to bring these heinous crimes to the attention of the media and to the public; also, to the attention of the provincial government whose job it is to protect innocent animals from abuse. Every day this disgusting farm is not held accountable for their actions, our resolve will only strengthen. And our focus will become the government officials who refuse to address the shameful conditions at Guzoo.

By now, the RCMP should be well aware of how effective Anonymous can be. Remember Halifax?

To Guzoo Animal Farm’s owner, Lynn Gustafson, we know who you are and this is your only warning.

If you believe all life is sacred and deserves to be protected from inhumane treatment, join us.

We do not forgive

We do not forget

The reference to Halifax is not, as you might suspect, a reminder of some grand mischief carried out there—rather, Anonymous had staged a peaceful protest at the district Royal Canadian Mounted Police office to demand justice for Rehtaeh Parsons, a 17-year-old who committed suicide after being bullied in connection with a sexual assault. Anonymous claimed to know the identities of the boys involved in the assault. The RCMP eventually reopened the case.

In that light, the threat to Gustafson seems less about ruining the man’s life directly and more about putting Guzoo in the public eye, where its inhumane practices can rally a grassroots effort. For his part, Gustafson was incensed by the video and subsequent abuse coverage:

“Domestic terrorists is what they are,” Gustafson said Monday. “The government has six months to do something about this group … or I will shut my gates to the public. It will be for my family and my friends.”

He has filed a trespassing complaint that the RCMP is currently “probing.” According to that same article in the Calgary Herald, Guzoo has faced well-evidenced accusations of animal cruelty since it opened in 1990. Will Anonymous have the clout and determination to shut the place down for good?

One would hardly bet against them.