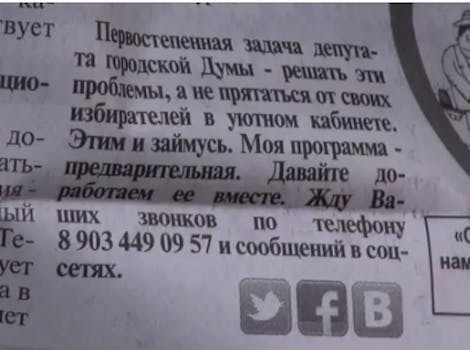 Gennady Ufimtsev, a Russian city council candidate , has been disqualified from running for office just because he used the logos of a few social networks in a political ad.

Twitter and political controversies go hand in hand. But you’ve got to feel sorry for Gennady Ufimtsev, a Russian city council candidate who’s been disqualified from running for office just because he used the logos of a few social networks in a political ad.

A judge in the Russian city of Krasnodar, on the northeast edge of the Black Sea, ruled that Ufimtsev had violated the copyright of Twitter, Facebook, and the Russian network Vkontakte when he published their logos in a classified ad published in the local newspaper. The ad suggested voters could find more information about his campaign online.

Ufimtsev’s first strike, however, is no doubt his party affiliation. As part of the Russian opposition movement, Ufimtsev has painted a great big political target on his back. Indeed, the only reason any judge heard about the copyright violation was because his political foe alerted the authorities. Rinat Galliamov is a member of the party “Cities of Russia,”  which Global Voices Russia correspondent Kevin Rothrock describes as “a government-friendly vehicle, probably designed to spoil the solidarity of the opposition vote.”

This is, in fact, the second opposition candidate to get dumped by the same judge: Another city council candidate,  Anatoly Ovechko, was kicked out of the election after spending $1,000 over the threshold allowed by Russian campaign finance laws.