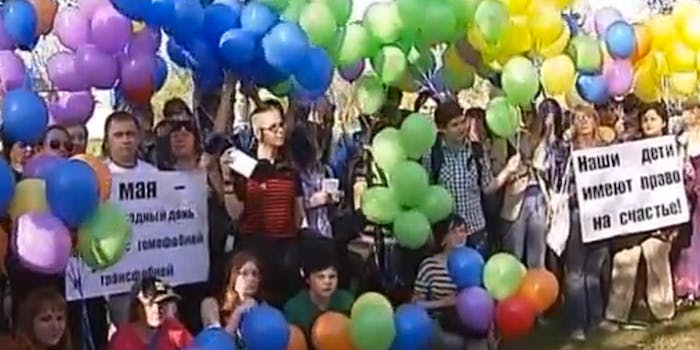 Vkontakte now allows users to be "in a relationship" with a same-sex partner.

In Russia, it’s still considered taboo to be gay in public, but on the Internet, it’s now slowly becoming more accepted.

On Vkontakte (or VK.com), the country’s most popular social networking site, users now can list a person of the same sex as their partner. VK.com, which reportedly has more than 150 million user accounts, could spark a major change in a country notorious for its anti-gay perceptions and ban on gay marriage.

The change to allow same-sex options came from a male user named Oleg, according to GayStarNews. He sent a request to VK.com asking for the option, but the site’s technical staff reportedly denied it, telling Oleg to “change his sex.”

Dismayed by the site’s alleged discrimination, Oleg told his story to Rainbow Association, a Moscow-based pro-gay organization. VK.com stood by its decision, saying that a same-sex couple status would not be added to the site.

However, VK.com’s founder, Pavel Durov, reportedly tweeted to enraged pro-gay users that they would “get what you want.” A same-sex couple option was implemented shortly after.

“By agreeing to the demands of degenerates, [Durov] is suggesting that children revise their sexual orientation,” said Vitaly Milonov, a member of United Russia (Russia’s largest political party). He was referring to the fact that many VK.com members are under 18 years old.

This isn’t the first time a social network’s acknowledgement of same-sex couples has sparked controversy in Russia. In July, Facebook introduced same-sex marriage icons that hardline Russian Orthodox activists blasted the move as “gay propaganda,” claiming the site was “flirting with sodomites.”

They called on the Russian government to ban Facebook, but nothing came of their demands, and the site remains accessible to Russian users.