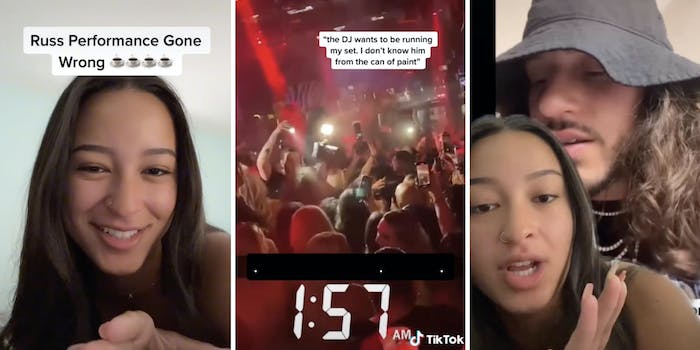 ‘I have not heard one good thing about this guy’: Worker claims Russ was rude to employees at nightclub performance

'Russ, are you confused? We are paying you to be here.'

Russ is currently on tour, and an Arizona stop has produced some TikToks alleging “disrespectful” behavior.

On Tuesday, TikToker @lexaflexa999 posted a clip captioned “Russ Performance Gone Wrong,” in which she details secondhand accounts of the rapper’s set in Scottsdale, at the club where she works. She clarifies below the video: “I’m going off of stories from multiple coworkers and guests in the crowd that night.” The clip has more than 61,000 views.

She says Russ—real name Russell Vitale—and his entourage arrived late to a scheduled gig and proceeded to be rude to staff before he even performed. There were allegedly technical difficulties, and an issue with the house DJ; lexaflexa999 included a clip filmed by someone in attendance that shows Russ on stage ranting about the DJ and the club owner, with a time stamp showing the club is closing in three minutes.

“So he really didn’t get to perform,” she says.

@lexaflexa999 He’s corny and rude? Pick a struggle dude. 😵‍💫 (some details may be inaccurate. I left work right when he got there bc I didn’t care to see him. I’m going off of stories from multiple coworkers and guests in the crowd that night) #Russ #scottsdale #nightclub ♬ Fuck Russ – T-wayne

Russ allegedly posted (and then deleted) an Instagram Story about the night; lexaflexa999 says she didn’t catch the story herself, but her co-worker’s post suggests he’s “talking mad shit about the club.” She said in the comments that Russ was paid “thousands” for the set but said in the TikTok that the “contract was breached.”

Elsewhere in the comments, someone claimed that at an afterparty for a show in Boise, Idaho, Russ got “comped” bottle service and left no tip.

“I have not heard one good thing about this guy,” another commenter said.

Another TikTok shows a longer version of the clip lexaflexa999 included, in which Russ claims the audience is witnessing a “power trip.” The screen behind him appears to say Hi Fi; that’s likely Hi Fi Kitchen & Cocktails in Scottsdale, which advertised a May 6 Russ afterparty last week.

Russ, who has more than 2.4 million followers on TikTok and rose to popularity thanks to songs like 2019’s “Best On Earth,” has not publicly addressed the set again.

The Daily Dot reached out to lexaflexa999 and Russ’ management for comment.