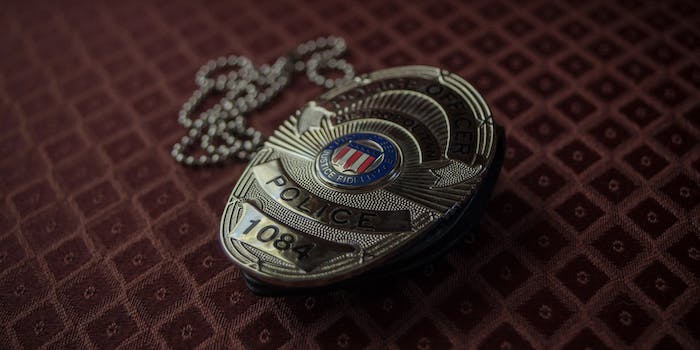 Judging from the online reaction, you’d think school boards had voted to ban every book ever written and the first amendment was overturned.

This week, the television series RuPaul’s Drag Race (and its parent network, Logo TV) removed the term “she-male,” considered derogatory by many transgender activists, from its lexicon.

This was after the network received some deserved criticism for a recent episode that saw competitors clocking individuals as either “female” (i.e. a cisgender woman) or “she-male” (in this case, meaning a drag queen, usually cismale) based upon photographs of body parts cut out of context. The offending episode was removed from Internet streaming sites, and future episodes will excise a longstanding feature called “she-mail,” a punny name for RuPaul’s weekly video communiques to the queens.

Judging from the online reaction to the decision, you’d think school boards had voted to ban every book ever written, the House Un-american Activities Committee had been reinstated, and the first amendment was overturned. 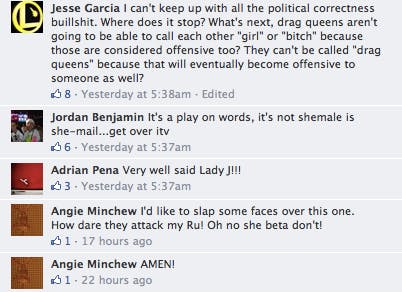 Angry fans and past contestants of the show—primarily gay cisgender men—have taken to social media, calling the move a violation of free speech and a betrayal of drag’s countercultural roots. At the heart of their argument is a contention that everybody nowadays has become oversensitive. Apparently there’s an army of professional language police looking for any opportunity to take offense and to ruthlessly attack perceived offenders.

It seems to me that in all this talk about the army of the offended, a bogeyman is being constructed. However, I’m never sure exactly who it is we’re talking about. It’s not the trans and social justice activists I know, who bring up issues of language not to silence individuals, but to address broader issues of systemic oppression, and to make us more aware of our (often unconscious) complicity in these systems.

From where I’m sitting, the most seemingly offended by far have been the folks crying censorship. Don’t attack your allies, they say, attack your enemies. But the point was never to attack, it was to critique.

LGBT communities are far too diverse for such an easy division between “enemy” and “ally.” Self-proclaimed allies need to stop hearing every criticism as a condemnation. The goal of anti-oppression activism is not to shame people. In fact, most anti-oppression educators would say guilt is counter-productive. Rather, increased awareness of privilege should lead to greater action, in solidarity with those whom an issue most directly affects.

That said, while I consider it more positive than negative, I do not necessarily applaud Logo TV and RuPaul’s Drag Race’s decision. This seems very clearly to be a PR move, not an invitation to further conversation. While the episode’s potentially harmful impact on viewers should not be discounted, removal of the “female or she-male” sequence from the Internet erases an opportunity for constructive discussion and reinforces the notion that in efforts for inclusive language, someone is being silenced.

In the environmental movement, when a particularly egregious polluter is called out publicly and raked over the coals, they call it “rank and spank.” This tactic has its place, particularly for mobilizing public sentiment around an issue. Unfortunately, online activism seems increasingly to be functioning only as the “rank and spank” of the anti-oppression world, resulting in seemingly endless loops of accusation and recrimination, rather than meaningful and transformative dialogue.

But unlike many, I do not place all the blame for this development on activists. A bigger part of the problem is corporate media institutions, which are rigid, and fundamentally not equipped to respond to criticism through anything but policy and PR statements. The question becomes not, “How can we use this incident as an opportunity to build more holistic communities,” but rather, “Who should we fire?”

Recently, trans artists like Calpernia Addams and Our Lady J have highlighted generational and class differences in how language is used and interpreted within trans communities. The linguistic anthropologist David Valentine, in his book “Imagining Transgender: An Ethnography of a Category,” explored the experiences of urban, gender non-conforming people of color who the broader transgender rights movement might categorize as transgender, but who would never use this language to describe themselves.

As a youth worker, I have learned that “safe space” is impossible. The best we can work for is safer space, where those who feel uncomfortable are able to express their discomfort, where others respond without defensiveness, and where the community as a whole grows from this process, a process which is never finished.

Calling people what they want to be called (and avoiding potentially harmful words) isn’t censorship, it’s a show of respect. And one I believe should be a prerequisite for any deeper conversations about the nuances of context. Otherwise, to quote the great Regina George, you can’t sit at our table.

Language is inherently problematic, and people will be hurt. But how we respond to that hurt is what will differentiate and ultimately strengthen our communities.

Photo via jaredasato/Flickr (CC BY 2.0)