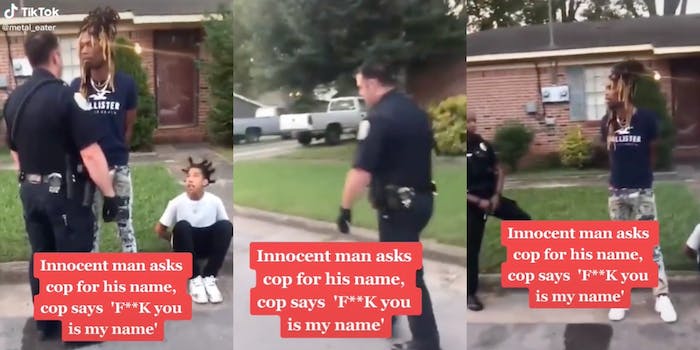 ‘F*ck you is my name’: TikTok shows rude cop aggressing man who asks for his name

The handcuffed man asks for the cop's name and badge number and gets cursed out in response.

A trio of viral TikToks shows a young man being detained and aggressed by a rude cop who, when asked for his name, tells the man, “‘Fuck you’ is my name.”

The footage, posted by Anthony Red Bear (@metal_eater), shows the stop in progress. Three officers have two young Black men in handcuffs, though it’s not clear why they’ve been detained.

The first video has over 928,000 views. One of the men, believing he’s been unjustly harassed by the police, asks for the officers’ supervisor. The aggressive officer, apparently already peeved by the young man’s attitude, informs him that he is the supervisor.

“Oh, you are the supervisor,” the young man says. “What was your name and your badge number again?”

“Fuck you,” the rude cop says as he walks away.

This time the officer turns around: “‘Fuck you’ is my name!”

The videographer says, “I got that on cam. It’s crazy.”

The second video is actually a prelude to the first. The aggressive officer provides his badge number and gets up in the young man’s grill.

“Are you threatening me?” he asks the rude cop. “You’re looking very like you’re trying to threaten me, the way that you approached me.”

The third video shows the young man asking if the officers’ body cams are on and once again demanding their names and badge numbers. He says he wants a supervisor because he’s been “unlawfully searched.”

TikTok users criticized the cop for the aggressive and unprofessional behavior he displayed in all three videos.

“Real tough guy for saying that to a man in handcuffs while walking away,” one viewer commented.

“How do they expect the public to trust the police, if they behave like that?” another user asked.

The third police video does, however, show the second man seated on the ground breaking the tension by asking a different officer a ridiculous question: “Can y’all put a blunt in my mouth?”