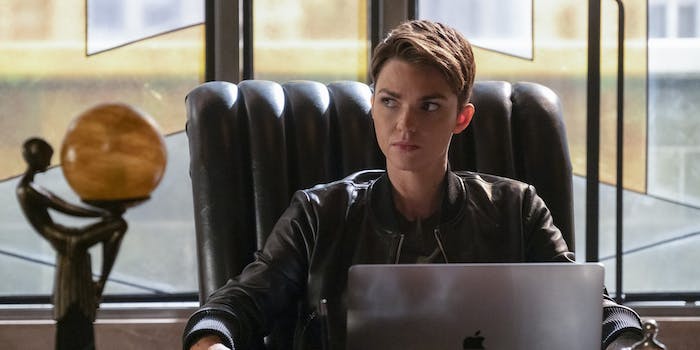 Her allegations include horrifying injuries and abusive behavior.

When Ruby Rose left the CW show Batwoman after just one season, the news caught everyone by surprise. It’s rare for a lead actor to leave a show with no explanation, but now Rose is breaking her silence. Posting on Instagram Stories, she shared some disturbing allegations about her experience working on Batwoman.

The allegations characterize Batwoman as a toxic, dangerous working environment, with Rose pointing the finger at showrunner Caroline Dries, producers Sarah Schechter and Greg Berlanti (the mastermind behind numerous DC Comics shows), and former Warner Bros. executive Peter Roth. She accuses Roth of sexually harassing female employees and hiring a private investigator to follow her. She also says that after she sustained a serious neck injury while filming Batwoman, Roth pressured her to return to work 10 days after surgery:

“To everyone who said I was too stiff on bawoman, imagine going back to work 10 days after this … 10 DAYS!!!!!! (or the whole crew and cast would be fired and I’d let everyone down because Peter Roth said he wouldn’t recast and i just lost the studio millions (by getting injured on his set).”

“I wouldn’t return for any amount of money nor if a gun were to my head.. NOR DID I QUIT,” she writes. “They ruined Kate Kane and they destroyed batwoman, not me. I followed orders, and if I wanted to stay i was going to have to sign my rights away.” She goes on to share more accusations about injuries incurred while filming the show, along with an allegation that her co-star Dougray Scott “hurt a female stunt double” and “abused women.”

“A crew member got 3rd degree burns over his whole body, and we were given no therapy after witnessing his skin fall off his face but I was the only one who sent him flowers and cards and then were told we had to do a sex scene without a minute to process, we lost 2 stunt doubles, i got cut in the face so close to my eye in a stunt I could have been blind. a woman was left quadriplegic and they tried to blame it on her being on her phone.”

According to news reports from March 2020, a production assistant was indeed paralyzed while working on the Batwoman set. The bucket of a lift was lowered onto her head, and she is now paralyzed from the waist down. There were no independent reports of a crewmember receiving third-degree burns, but plenty of workplace accidents don’t make the news.

Ruby Rose also said that showrunner Caroline Dries rarely visited the set, yet still pressured the crew to finish filming during the early months of the pandemic. “i told her everyone was too distracted, constantly checking Covid updates checking on friends and seeing riverdale, the flash and super girl shut down already, i felt something bad would happen,” Rose wrote. Alongside other CW shows filming in Vancouver, Batwoman was eventually shut down due to Covid-19 testing delays.

Rose has discussed her on-set injuries in previous interviews, but up until now, she downplayed any rumors of conflict behind the scenes. Speaking to Entertainment Weekly last year, she described herself as proud and grateful for her experience on Batwoman. But as we know from other scandals in the entertainment industry, people sometimes put a positive spin on traumatic experiences because they fear professional reprisals, or are tied into publicity obligations.

In the wake of her departure from Batwoman, Ruby Rose has moved onto other projects. She was replaced by actress Wallis Day as Batwoman‘s Kate Kane, with Javicia Leslie taking the new lead role as a different Batwoman, Ryan Wilder. Season 3 premiered last week.

“Despite the revisionist history that Ruby Rose is now sharing online aimed at the producers, the cast and crew, the network, and the Studio, the truth is that Warner Bros. Television had decided not to exercise its option to engage Ruby for season two of BATWOMAN based on multiple complaints about workplace behavior that were extensively reviewed and handled privately out of respect for all concerned,” the company said in a statement.

This story has been updated with a statement from Warner Bros.